Always tight on money, with a self-inflated view of his own “genius,” Bruce (Eden Marryshow “Jessica Jones”) is an egocentric, self-professed writer, 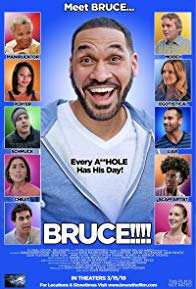 director, artist and playboy who damages all of his relationships, romantic or otherwise, as he cons his way through his self-obsessed existence with a mixture of swagger and deeply insecure neuroticism. On the heels of his parents cutting him off, his free ride comes to an abrupt end after his roommate (Jason Tottenham “Quantico”) informs him he’s moving in with his fiancé (Jade Eshete “Dirk Gently’s Holistic Detective Agency”). Desperate to

keep his apartment and stay afloat financially, Bruce concocts a plan to run an ad for a hot female roommate and charge her 80% of the rent. When Bruce falls for one of the applicants (Mle’ Chester  “Vinyl”), he tries to turn his life around, but as the saying goes, “karma is a bitch.”  Will Bruce see the error of his ways or remain irredeemably awful? Director, Producer, Writer Eden Marryshow joins us to talk about assembling a terrific supporting cast and the inspiration for his brash feature film debut.

For news and updates go to: brucethefilm.com