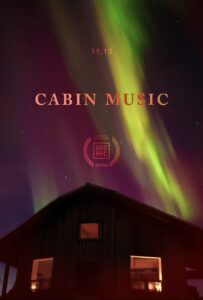 intriguing, transformative meditation willed into existence by an artist fully committed to channeling unknowable natural forces through his own music and onto the screen. All of which is taking place at a time when a spiritual crisis spurs James Carson to leave the constraints of the conservatory, pianist and embark on a journey of discovery and making new connections between music and the natural world. Carson’s travels culminate in a cabin he builds in the Canadian wild where his experiences meld into a new form. A lyrical, 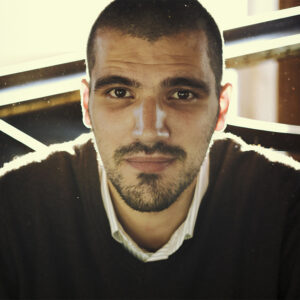 genre-defying feast for the senses, CABIN MUSIC is a testament to the twin transcendent powers of music and nature. Director, producer, cinematographer, editor, digital colorist and composer James Carson joins us for an in-depth conversation on  the roots of

his music, why playing the “mistakes” in formal music inspires him, presenting his music on three distinct artistic platforms and his decision to take an unconventional approach to building the cabin at the heart of this film.

For more go to: cabinmusic.earth

For more on James Carson, go to: jamescarson.com

About the filmmaker – Pianist James Carson has developed a new form of music and over the last twelve years has produced and directed Cabin Music, a feature film, to share it with the world. A childhood prodigy born with perfect pitch, Carson composed complete songs at age four and had his music performed by the Edmonton Symphony Orchestra at age sixteen, leading him to be called “one of the most gifted rising stars” by the Edmonton Journal. When he attended the New England Conservatory, however, his studies with Joe Maneri, Cecil Taylor, and the poet Robert Creeley led him to a dramatic life change: he walked away from music and spent two years backpacking and farming overland from Spain to Japan. After his return to Northern Alberta, Canada, he then spent five years designing, building, and practicing in a remote strawbale cabin. The musical result was multilayered, detailed, meditative, and harmonious. Praised by Pulitzer-Prize-winning composer Milton Babbitt, who wrote of his “astonished joy” in response to Carson’s “exceptional pianism”. He lives in New York and returns regularly to his cabin.

Director / Musician Statement – Almost twenty years ago I walked away from the New England Conservatory in pursuit of what seemed an unreachable goal: for the whole earth to play the piano. That vision is now coming to fruition over the next month in Manhattan. On October 27 I’ll be performing in the Crypt at the Church of the Intercession in Harlem with Death of Classical. On October 28th I’ll be releasing my debut album The Story of Birds, on Bright Shiny Things. Finally, on November 13 Cabin Music, the feature documentary film, will have it’s world premiere at the Cinépolis in Chelsea with DOC NYC. Cabin Music begins with the words “The cabin and New York are one building: you open the cabin door and walk out into New York.” Nothing could be happier than to see familiar faces at these events. So, if I may, I’d like to extend an invitation, to friends old and new, to try that door in the opposite direction: to open the door of New York and step into the cabin. – James Carson

“The performance reiterated the concept that nothing that repeats is ever the same, even if only because we have changed in the intervening moments…. It does not need a name to exist; it just is.” – Feast of Music

“Delicate music surrounded by the aura of silence.” – Boston Phoenix

“I hope only you can infer something of my astonished joy in response to your performances.” – Milton Babbitt

“A quest to create sounds that reflect the magnificence of nature.” – Times of India

“Being in the moment… we were transported to the stratosphere. ”– Berkshire Fine Arts