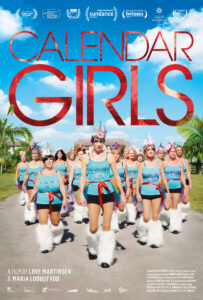 Southwest Florida – the CALENDAR GIRLS. But under the veil of fake lashes and unicorn horns lurks the deeper truths of what aging women face within society. Sisterhood, love, loss – all come into play in this uplifting film about trying to age on your own terms and refusal to become invisible. Directors Maria Loohufvud and Love Martinsen craft a life-affirming, feel-good documentary that shakes up the outdated image of what it means to be an “old lady”. It’s a call for everyone to dance their heart out, while you still can. Directed and produced by Maria Loohufvud and Love

Martinsen, CALENDAR GIRLS has screened at over 40 film festivals including 2022 Sundance Film Festival while bringing joy to all who watch the film. It has also won numerous awards during its festival run. Co-directors Maria Loohufvud and Love Martinsen stop by to talk about this lyrical look at women that are determined to face down agism, sexism and thrilled to live their lives while relishing the opportunity to entertain, young and old.

For more go to: calendargirlsfilm.com

Released through Pink Dolphin, the film will open at the Laemmle Town Center Encino in Los Angeles on Nov 18.

“The costumes and dance numbers are fun but what is most touching is the way the women care for each other.” – Nell Minow, RogerEbert.com

“Calendar Girls is a documentary on what it means to grow older while exploring the power of friendships, leisure, work and learning new thingseven later in life.” – Aviva Dove-Viebahn, Ms. Magazine

“This fantasia in sparkles and patriotic leotards is a phenomenon worthy of ethnographic study, and though it doesnt dig too deeply into its subjects beliefs, the film is a highly watchable, admiring snapshot of girls who just want to have fun.” – Shayna Maci Warner, The Film Stage