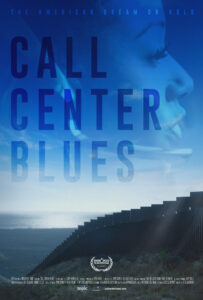 displacement and opportunistic capitalism, CALL CENTER BLUES follows four characters as they struggle to make sense of their lives in Tijuana. Each with a vastly different story, they are all linked by their displacement and the sole choice of call center work they have in a country that is so unfamiliar and oftentimes frightening, yet other times a ray of hope. Tijuana becomes their home, a place defined by the border but yet defiant towards it, a no man’s land where everything and everyone

feels transient. These characters paint a picture of love, loss and longing – for home, for an American Dream deferred, and for justice. Director Geeta Gandbhir joins us conversation on an aspect of immigration and deportation that is as relevant and heartbreaking as any immigration issue and the importance that an Oscar nomination brings to the issue and the film.

About the filmmaker – Geeta Gandbhir is an award-winning director, producer and editor. As director, she won Best Documentary at the News and Doc Emmys for I AM EVIDENCE, an HBO Documentary Film, and Best Government and Politics Documentary for ARMED WITH FAITH, a PBS Documentary film. As editor, she won a Primetime Emmy for Best Editing for Spike Lee’s HBO documentary series WHEN THE LEVEES BROKE and also for the HBO film BY THE PEOPLE, THE ELECTION OF BARACK OBAMA. A documentary film she co-produced, THE SENTENCE, for HBO, also won a Special Jury Primetime Emmy.Other feature docs she co-directed include PRISON DOGS, A JOURNEY OF A THOUSAND MILES: PEACEKEEPERS, and REMEMBERING THE ARTIST: ROBERT DENIRO SR.She created and is co-directing and co-producing a series on race with The New York Times Op-Docs titled “The Conversation” which won the AFI Documentary Film Festival and a MacArthur Grant. She has been the recipient of a Ford Foundation grant, a MacArthur Grant, among others, and in 2017, she was the recipient of Chicken and Eggs prestigious Breakthrough Filmmaker Award.