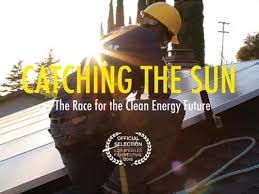 An unemployed American worker, a Tea Party activist, and a Chinese solar entrepreneur race to lead the clean energy future. Who wins and who loses the battle for power in the 21st century? Through the stories of workers and entrepreneurs in the U.S. and China, Catching the Sun captures the global race to lead the clean energy future. Over the course of a solar jobs training program, Catching the Sun follows the hope and heartbreak of unemployed American workers seeking jobs in the solar industry.  With countries like China investing in innovative technologies and capitalizing on this trillion-dollar opportunity, Catching the Sun tells the story of the global energy transition from the perspective of workers and entrepreneurs building solutions to income inequality and climate change with their own hands. Their successes and failures speak to one of the biggest questions of our time: will the U.S. actually be able to build a clean energy economy? Catching the Sun director Shalini Kantayya finished in the top 10 out of 12,000 filmmakers on Fox’s ON THE LOT, a show by Steven Spielberg in search of Hollywood’s next great director. Her sci-fi film about the world water crisis, a DROP of LIFE, won Best Short at Palm Beach International, and was broadcast on national television in the U.S. and India. Director Kantayya stops by to talk about her hopeful and enlightening documentary and the promise of a brighter, sunnier future.

For news and updates go to: catchingthesun.tv

“A must-see film. An eye-opening look at workers and entrepreneurs on the forefront of the clean energy movement that will transform, and enliven the way you see the future. What is clear is the wonderful opportunity the transition to clean energy represents.” – MARK RUFFALO

“The battle for a greener tomorrow, we are reminded, has its casualties.” – New York Times

“The film is most persuasive when demonstrating that the need for solar energy transcends partisan politics.” – Village Voice