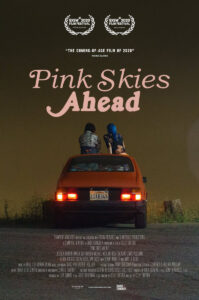 Barden) who, after dropping out of college and moving back home to live with her parents, is diagnosed with an anxiety disorder. Skeptical of her doctor’s opinion — she hasn’t had a panic attack after all —Winona carries on with her wild lifestyle. Only when things begin to truly unravel around her, does she reluctantly decide to see a therapist and face her truths. PINK SKIES AHEAD showcases mental health issues in a nuanced and authentic way and is a featured part of MTV’s newly-launched Mental Health is Health initiative. PINK SKIES AHEAD is Director Kelly Oxford’s feature-length directorial debut and is based on “No Real Danger,” an essay from her second

This Is Spinal Tap), Lewis Pullman (Bad Times at the El Royale), Evan Ross Cameron (The United States vs. Billie Holiday), Odeya Rush (Goosebumps, Lady Bird), Rosa Salazar (Alita: Battle Angel) and Henry Winkler (Barry). Writer and Director Kelly Oxford joins us for a lively conversation on making the jump from novelist / essayist to filmmaker and the role that media and storytelling can play in addressing our nation’s persistent and growing mental health challenges.

PINK SKIES AHEAD, written and directed by New York Times best-selling author Kelly Oxford, will premiere, commercial-free broadcast on Saturday, May 8 at 9:00PM ET/PT on MTV with a simulcast on Pop TV.

Director’s Statement – Pink Skies Ahead is loosely based on events that occurred when I was nineteen years old. It is a manifestation and reckoning with my own anxiety struggles. Purely out of self-protection, I’ve spent my life creating a firmly independent exterior surface that does not reflect my inner turmoil or compulsive and obsessive worried thoughts. As a forty-two-year-old woman, I’m still grappling with shame and denial of my own inner workings as an anxious person. The catharsis of writing and directing Pink Skies Ahead was a huge step in accepting myself. And I hope our film helps others feel less shame in their “not normal” feelings than I did. – Kelly Oxford

Everything Is Perfect When You’re a Liar

When You Find Out the World is Against You: And Other Funny Memories About Awful Moments

“The catchy title’s a clever way of saying “It gets better,” and in the end, that feels as true for Winona as it does for the high-potential writer-director who created her.”  – Peter Debruge, Variety

“Pink Skies Ahead makes some major strides toward destigmatizing mental health disorders and therapeutic treatment, thanks to Oxford’s empathetic approach and the way she normalizes these experiences through the eyes of her protagonist.” – Brent Hankins, The Lamplight Review