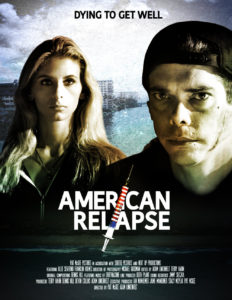 industry. Against the odds, in an “Us vs. the World” mentality, two recovering addicts spend their lives pulling needles out of the arms of addicts and assist in placing them in reputable treatment facilities.  The film features Frankie and Allie who live and work in Delray Beach, Florida, the Rehab Capital of America, now referred to by some as the Relapse Capital of America. They allowed the film crew all access for one weekend. What transpires over 72 hours is not only captivating and raw, but a heart-breaking rollercoaster ride. Frankie is 38 and has relapsed multiple times but continues to operate his F*ck Heroin Foundation with his mother. Allie is 28 and has been clean and sober for 10 years. While they are at different points on the recovery spectrum, they both share a deep belief in the 12th step: helping others.  These unlikely and imperfect heroes opened

their lives for the world to see, hoping to shine a light anywhere and any way they can. In the process, they show viewers and addicts alike that despite seemingly impossible odds and devastating damage, empathy and hope can restore a little bit of humanity to those who struggle and can sometimes save their lives. Co-directors Pat McGee (Dopesick Nation, The Deported) and Adam Linkenhelt (24 to Life) join us to talk about their raw, honest film and South Florida’s heroin epidemic and the revolving door of the for-profit rehab industry.

For news and updates go to: americanrelapse.com