Set in 1985, against the backdrop of social hysteria surrounding gory British video nasties. 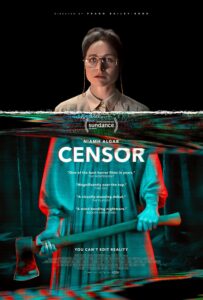 CENSOR is a psychological horror starring Niamh Algar (Raised By Wolves, The Virtues, Calm With Horses). Film censor Enid takes pride in her meticulous work, guarding unsuspecting audiences from the deleterious effects of watching the gore-filled decapitations and eye-gougings she pores over. Her sense of duty to protect is amplified by guilt over her inability to recall details of the long-ago disappearance of her sister, recently declared dead in absentia. When Enid is assigned to review a disturbing film from the archive that echoes her hazy childhood 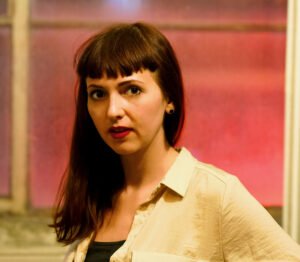 memories, she begins to unravel how this eerie work might be tied to her past. After viewing the strangely familiar video nasty at work, Enid attempts to solve the past mystery of her sister’s disappearance, embarking on a quest that dissolves the line between fiction and reality. CENSOR had its world premiere at the Sundance Film Festival 2021, opening the Midnight section of the festival, and will have its European premiere at Berlinale – Berlin International Film Festival. Director Prano Bailey-Bond stops by for a conversation on her debut feature film that flawlessly captures the frightening ambiance of the “nasties” while plumbing the depths of Enid’s defenseless psyche.

For news and updates go to: censormovie.com

Watch On Demand at: censormovie.com

About the filmmaker – Prano Bailey-Bond is a director and writer who grew up on a diet of Twin Peaks in the depths of a strange Welsh community. Named a 2021 ‘Director to Watch’ by Variety and a Screen International ‘Star of Tomorrow’ 2018, Prano’s work invokes imaginative worlds, fusing a dark vocabulary with eerie allure, revealing how beauty resides in strange places. Her debut feature film, CENSOR, had its world premiere at the SUNDANCE FILM FESTIVAL 2021, opening the festival’s Midnight section, moving next to its European premiere at the BERLINALE – Berlin International Film Festival. Prano’s strong body of shorts have screened at festivals including BFI London Film Festival, Tampere Film Festival, UKMVA’s, Sitges Film Festival and Melbourne Int’l Film Festival. She was one of 17 filmmakers selected for the BFI Network@LFF 2017 which identified original new voices, iconoclasts and risk takers. She is an alumna of the Berlinale Talent Campus. Her short film NASTY screened at over 100 festivals to-date, winning awards globally.  SHORTCUT, made as part of Film4’s Fright Bites series, was broadcast on Film4 and is available to view on All4. It screened at festivals around Europe, the USA and Canada, and toured with The Final Girls‘ WE ARE THE WEIRDOS program. THE TRIP won Best Director at Underwire Festival. Based on a real-life case study by ECPAT UK, it has been used to educate Police and other professionals on recognizing victims of human trafficking. Prano’s post-apocalyptic short MAN VS SAND, commissioned by The Letters Festival, Milan in association with London Short Film Festival, won Best Experimental Short at Aesthetica Short Film Festival, who described it as “a powerful satire of the live-to-work ethic”. Her music videos have picked up accolades including a UKMVA, Best Music Video at the European Independent Film Festival and Best Music Short at London Short Film Festival.  Prano is on the Advisory Board for Underwire Festival, is a member of  Cinesisters,  BAFTA and is also an award-winning editor. For more go to: pranobaileybond.com

“Bailey-Bond creates something almost unbearably close and oppressive, like the bottom of a murky fish tank. It’s a very elegant and disquieting debut.” – Peter Bradshaw, Guardian

“Censor works as such a strong study of someone whose personal and professional lives are dangerously intertwined and loses sight of every boundary in her life, though Bailey-Bond ensures it has plenty of edge.” – Stephen Saito, Moveable Fest

“Bailey-Bond creates something almost unbearably close and oppressive, like the bottom of a murky fish tank. It’s a very elegant and disquieting debut.” – Peter Bradshaw, Guardian

“With a winning confidence, [Bailey-Bond] guides the viewer to a frightening, disorienting, and frankly shocking third act.” – Nick Allen, RogerEbert.com