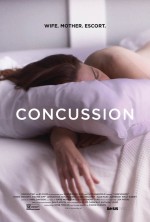 Nominated for the Grand Jury Prize at the 2013 Sundance Film Festival and a Film Independent Spirit, Concussion is a poignant sexual examination of Abby Abelman (Robin Weigert, in a star-making, turn), a married and wealthy forty-something lesbian housewife who suffers a blow to the head, only to find herself re-examining every corner of her suburban New Jersey life in an effort to confront a mounting desire for something more. Soon Abby sets in motion a double life as a high-end escort. Palpably sensual and deliciously contained, Concussion is a keen observation of the complicated contours in one woman’s epic mid-life crisis. The film mark the auspicious debut effort from writer-director Stacie Passon.

“Concussion isn’t some sultry, titillating sex-fest, it’s an exploration of not just sexuality and human growth, but… a brilliantly nuanced look at the complications of modern relationships.” — Film Threat

Key to Concussion is the fearless performance of Weigert, best known for playing Calamity Jane on Deadwood.  – Village Voice