CRUTCH takes the audience on a journey that literally spans the entire globe. The 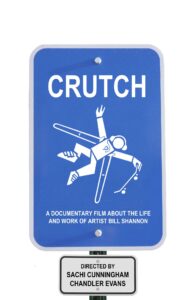 documentary features the abandoned Pittsburgh steel mills of Bill’s childhood; his diagnosis with

Legg-Calvé-Perthes disease, a rare, degenerative condition of the hip; the underground NYC break dance battles of his twenties; his groundbreaking performances in Sydney, Quebec, Madrid, Helsinki, Moscow, London, Paris, Tokyo, and more. CRUTCH is a global story, a powerful story, a transformational story, and one which will have you re-evaluating your own perspectives. From childhood “cripple” to international provocateur,  CRUTCH is an engrossing, emotional story of an artist’s struggle to be understood and an auspicious DOC NYC

debut. Two decades in the making and employing a kinetic tapestry of 8mm film from the 70’s, Hi-8 and VHS tapes from the 80’s, mini-DV tapes from the 90’s, and stunning HD footage from the

2000’s,  CRUTCH documents Bill’s extraordinary life’s story: the history of Bill’s medical odyssey, his struggles with chronic pain, the evolution of his crutch dancing and skating, his rise to become a world-renowned performance artist, and his transformation from an angry skate punk to an international hero. Co-directors Sachi Cunningham and Vayabobo (Chandler Evans) join us to talk about Bill Shannon’s fierce determination to breakthrough cultural perceptions of what it is to be a dancer, skateboarder and performance artist.

For news, screenings and updates go to: crutchdoc.com

About the filmmaker – Director /Producer Sachi Cunningham is an award winning documentary filmmaker and Associate Professor of Journalism at San Francisco State University. A graduate of the UC Berkeley Graduate School of Journalism and Brown University, Cunningham has worked on the staffs of PBS FRONTLINE/World, where she covered stories from the first Presidential election in Afghanistan to sex trafficking in Dubai, and the Los Angeles Times, where she was recruited to start their first video team. When not making documentaries, Cunningham can be found swimming somewhere in the Pacific, where she is known for her pioneering big wave water surf photography

About the filmmaker – Director / Producer / Writer Vayabobo (Chandler Evans) is a writer/director, whose award winning videos have garnered over 150 million views online. Vayabobo wrote and directed for Disney Interactive and subsequently helped to launch Buzzfeed Video. He wrote Visions of Everest, a feature length documentary about the only blind man to summit Mount Everest and has written for TV shows on CBS, Syfy and CW. His work in advertising includes directing commercial spots for companies such as Disney, Singapore Airlines, Hamilton Beach and KB Homes. When not working, you can catch Vayabobo playing and documenting Capoeira around the world.