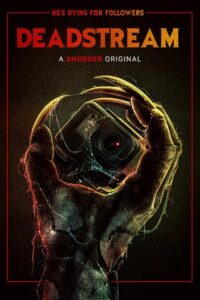 Winter) who attempts to win back his followers by live-streaming one night alone in a haunted house. But when he accidentally pisses off a vengeful spirit, his big comeback event becomes a real-time fight for his life. With DEADSTREAM, a rare horror comedy as frightening as it is funny, the Winters have boldly announced themselves as exciting emerging talent ready to take the genre scene by storm. The work of the filmmaking duo can next be seen in a  segment from Shudder’s hotly-anticipated

V/H/S/99, the latest installment in the celebrated found-footage horror series, which premieres out of TIFF’s Midnight Madness later this month. The DEADSTREAM was produced by Joseph and Vanessa Winter,

alongside cinematographer Jared Cook and actress Melanie Stone, who also star in the film. Co-directors / co-producers Joseph and Vanessa Winter join us for a conversation on the story behind the making of this wildly entertaining tale laced with humor, spot on performances and genuinely scary happenings, as well as their own foray, with the help of dedicated friends, into hair-raising world of independent filmmaking.

To watch Deadstream go to: shudder.com

About the filmmaker –  Vanessa and Joseph Winter are a writer/director duo best known for their critically acclaimed SXSW midnighter “Deadstream”, a horror comedy coming to Shudder in October. They also wrote and directed a segment of the highly anticipated V/H/S/99 which will have its world premiere at the Toronto International Film Festival.

“A horror-comedy you’ll want in your Halloween rotation. – Indiewire

“An absolute delight” – The Austin Chronicle

“Everything that a great midnight showing should be, the film is gross, funny, scary, and does not hold back anything. This is the perfect movie to see late at night with a group of friends.” – Nathaniel Muir, AIPT

“Deadstream is outrageous, delightful and deeply satisfying, a breath of fresh air in a genre that can far too often feel old and musty.” – Alexandra Heller-Nicholas, AWFJ Women on Film