DEAR COMRADES! is based on a true story surrounding a strike by factory workers on June 1st and 2nd, 1962 in the city of Novocherkassk. The raising of food prices and 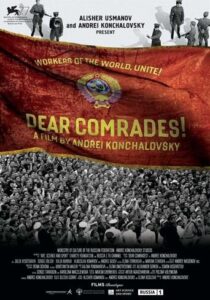 the lowering of wages at the local factory led to a spontaneous uprising by thousands of area residents that eventually leading to violent reaction by local and federal officials. The events of those two days was kept secret until the nineties. DEAR COMRADES! focuses on the life and family of Lyudmila (Julia Vysotskaya) is a Party executive and devout communist who had fought in WWII for Stalin’s ideology. Certain that her work will create a communist society, the woman detests any anti-Soviet sentiment. During a strike at the local electromotive factory, Lyudmila witnesses a laborers’ piquet gunned down under orders from the government that seeks to cover up mass labor strikes in USSR. After the bloodbath,

when survivors flee from the square, Lyudmila realizes her daughter has disappeared. A gaping rift opens in her worldview. Despite the blockade of the city, mass arrests, and the authorities’ attempts to cover up the massacre, Lyudmila searches for her daughter. We don’t know how the search will end, but realize that the woman’s life won’t ever be the same. Director Andrei Konchalovsky (Uncle Vanya, Siberiade, Runaway Train, The Inner Circle) and lead actor Julia Vysotskaya join us for a conversation on the importance of telling an unknown story, the role of art and storytelling and how Lyuda’s saga reflexes a broader perspective on Soviet-era repression.

For news and updates go to: neonrated.com/films/dear-comrades

Director’s Statement – The process of making films about the 1960s is increasingly becoming the process of restoring the historical authenticity of the era, a fairly difficult task all in itself. Recently we’ve been seeing plenty of films where the 60s-70s-80s of the 20th century look fake and contrived, without any resemblance to the Soviet films made at the time, like “The Great Cranes Are Flying” or “Ballad of a Soldier”. So, my goal was to scrupulously and in great detail reproduce the era of the USSR’s 1960s. I think that the Soviet people of post-war time, the ones who fought in the WWII until victory, deserve to have a movie that pays tribute to their purity and the tragic dissonance that followed the realization of how different the communist ideals were from the reality around them. – Andrei Konchalovsky

“KONCHALOVSKY’S MASTERPIECE. The artistry is calm, controlled, persuasively detailed… Catch it if you can. Beautiful and damning, DEAR COMRADES! is also an act of remembrance.” – Anthony Lane, The New Yorker

“A scintillating, surgical exposé of Khrushchev-era oppression… A 1962 massacre in the Soviet Union is reclaimed from its historical cover-up by Andrei Konchalovsky’s pristine, extraordinary drama… Perversely beautiful and coldly furious… meticulous and majestic, epic in scope and tattoo-needle intimate in effect.” – Jessica Kiang,  Variety

“Now in his 80s, Andrei Konchalovsky, the veteran Russian director… has made one of his most Russian, and most accomplished, latter-day films… Carried off with evocative precision and a cannily underplayed emotional tug. The drama keeps a well-calibrated balance between political horror, the matter-of-fact texture of everyday life, and the rhetoric that keeps the Soviet machinery oiled – and that Lyuda is struggling to see through. The film’s magnetic centre is a strong performance from Vysotskaya, working from a base line of initial testiness to rising anxiety and terror in face of the oppression that she realizes she has been enabling.” – Jonathan Romney, Screen Daily

“Although at first sight this dramatization of a 1962 strike at a factory in the U.S.S.R. may seem a long way from the interests of contemporary audiences, it is surprising how much resonance the film has with the political struggles of our own time. much credit due to Julia Vysotskaya and her uncommonly gripping perf in the main role.” – Deborah Young, – The Hollywood Reporter