In this emotionally moving documentary, Edith and Eddie, Edith Hill and Eddie Harrison get married in Virginia at ages 96 and 95. Since tying the knot, both Edith 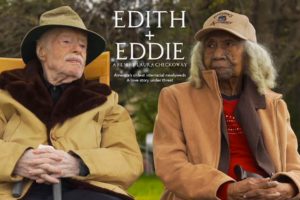 and Eddie have experienced an awakening; they have a new reason to get up in the morning. At the start of each day, he helps her put in her teeth. They enjoy exercising and relaxing by the river. They are always holding hands. We soon learn that the couple is embroiled in a legal battle between Edith’s daughters, over Edith’s estate and her

rights. The daughters are unable to reach an agreement so a court has appointed an outside guardian for Edith, a stranger that has never met Edith. Stripped of her own decision making, Edith is now a ward of the state. Edith and Eddie’s marriage is in danger of being torn apart. Then things take a dramatic turn. Director Laura Checkoway joins us to talk about her partnership with executive producer Cher, the bond she formed with Edith and Eddie and the greater truth about the care of our elderly in a culture that devalues seniors but covets their assets.

For news and updates go to: www.editheddie.com

For news and update go to: facebook.com/EdithEddieFilm

“‘EDITH+EDDIE’, the heartfelt story of two elderly lovebirds, is a heavyweight contender in this year’s Oscar® race for Best Documentary Short Subject.” –AwardsCircuit.com

“Devastating… It is the mix of incredible access and a willingness to embrace a story’s shrewdly synthesized structure, running the gamut from unbelievable fantasy to unbearable nightmare, that yields an extraordinarily memorable work of nonfiction that stands among the festival’s best.” — Jordan M. Smith, NonFics.com at True/False 2017

“EDITH+EDDIE starts out feeling like an inspirational story. A black woman and white man find each other, and love, in their mid-90s. But as the couple is separated due to a legal battle, what could have been a life-affirming hug turns into something darker: an indictment of the elder-care system, with racial undertones.” — Steven Zeitchik, Los Angeles Times

“One of the most beautiful and quietly furious films I have ever seen.” – Julia Reichert, director of A LION IN THE HOUSE

“All of the things we look for in a film… challenging, universal… a gift of love and compassion.” – Paul Booth, Talking Pictures

“In just half an hour, EDITH+EDDIE captures so much about love, aging and infirmity–and speak volumes about America’s issues with elder care and guardianship.” – Norman Wilner, Now Toronto