A hallucinatory cinematic fever dream, Dawson City: Frozen Time tells the bizarre true story of some 533 silent film reels, dating from the 1910s and 20s, that 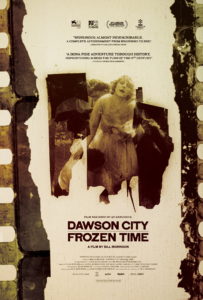 accumulated at the end of a film distribution line in northwestern Canada and which were miraculously discovered some 50 years later, in 1978, buried in a sub-arctic swimming pool, deep in the Yukon permafrost. Filmmaker Bill Morrison (Decasia, The Miners’ Hymns, The Great Flood) deftly combines excerpts from this remarkable collection with historical footage, photographs, and original interviews, to explore the complicated history of Dawson City, a Canadian Gold Rush town founded across the river from a First Nation hunting camp, and then traces how the development of that town both reflected and influenced the evolution of modern Cinema. Combined with a powerful, evocative score by Alex Somers ( Captain Fantastic; Hale County This Morning, This Evening; Honey Boy), orchestrated and arranged by Ricardo Romaneiro, Dawson City: Frozen Time is a triumphant work of art that spins the life cycle of a singular film collection into a breath-taking history of the 20th century. Director, writer and editor Bill Morrison joins us to talk about his amazing re-creation of a time and place that existed in the parallel universes of a nascent film industry and crushing avarice of a gold rush that still resonates today.

About the filmmaker: Bill Morrison has premiered films at the New York, Rotterdam, Sundance, and Venice film festivals, and multi-media work at major performance venues

around the globe such as BAM, the Barbican, Carnegie, and Walt Disney Concert Hall. Morrison’s films typically source rare archival footage in which long-forgotten, and sometimes deteriorated, imagery is reframed as part of a collective mythology. His work has been recognized with the Alpert Award, Creative Capital, the Foundation for Contemporary Art, a Guggenheim fellowship, and a mid-career retrospective at MoMA. His found footage opus Decasia (2002) was the first film of the 21st century to be selected to the Library of Congress’ National Film Registry. The Great Flood (2013) was awarded the Smithsonian Ingenuity Award of 2014 for historical scholarship. Dawson City: Frozen Time (2016) won a Critics’ Choice Award for the most innovative documentary of the year, and was named the best documentary of 2017 by the Boston Society of Film Critics.

“Bill Morrison, whose extraordinary documentary Decasia turned decomposing film stock into the stuff of avante-garde reverie, returns with another staggering journey into the past.” – J. R. Jones, Chicago Reader

“The thrilling documentary “Dawson City: Frozen Time” is indescribable not because it’s ambiguous (it’s totally straightforward) but because it does so many things so beautifully it is hard to know where to begin.” – Kenneth Turan, Los Angeles Times

“The rise and fall of Dawson City, intimately tied to the vagaries of climate and man’s greed, is heartbreakingly rendered.” – Peter Rainer, Christian Science Monitor