Violence has overrun El Salvador. El Salvador remains one of the most dangerous non-war zones in the world. Violent turf wars between rival gangs and the 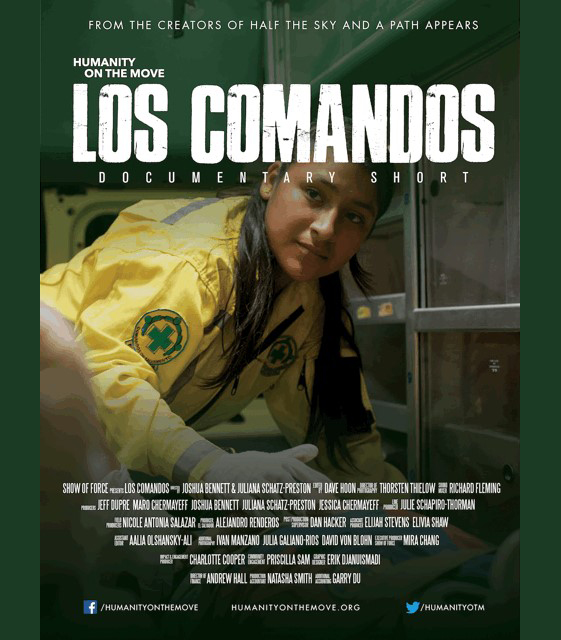 government threatens Salvadorans’ day-to-day life. This is highlighted by a continued migration crisis where families, and unaccompanied youth attempt to flee to neighboring countries or the United States, with hopes of a safer future. The emergency medical unit Los Comandos de Salvamento is standing up to the gangs’ reign of

terror. Sixteen-year-old Mimi is a dedicated Comando caught in the cross hairs. When her fellow Comando, 14-year-old Erick, is gunned down while serving, she faces pressure to flee El Salvador and head north. Co-directors Juliana Schatz-Preston and Joshua Bennett join us for a conversation on their ripped from today’s headlines project and the importance of putting a human face on the plight of these beleaguered people.

For news and updates go to: loscomandos.film

The Comandos de Salvamento (Los Comandos) provide a potentially life saving alternative for young people who want to avoid being recruited by gangs. Because the group does not discriminate when attending to victims, Los Comandos have earned a certain degree of respect from the gangs. Many of the volunteers find the Comandos base safer than home. Suport Los Comandos

GLASSWING help young people who remain in El Salvador or return after deportation, life is a daily struggle. Not only do they face extreme violence and poverty, but cycles of massive migration and social upheaval are also exacerbating issues of family disintegration, school dropout, early pregnancy, and limited economic opportunities. Youth face persistent stigma, social exclusion, and exposure to extreme violence and trauma. They lack opportunities to develop the core skills they need to thrive.  Support Glasswing International