Fifteen years in the making, The Animal People, Co-directed by Casey Suchan and Denis Henry Hennelly – Executive Produced by Joaquin Phoenix – follows the 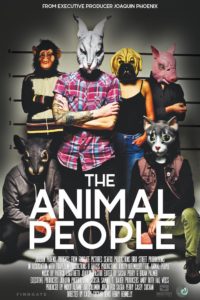 journey of six young Americans who find themselves targeted as terrorists by the US government for their involvement in a controversial protest campaign. Seeing the future of social movement organizing, the activists used the then fledgling internet to dramatically magnify their impact as they systematically knocked out the pillars of financial support that kept the company in business. But when letter writing and protests began to mushroom into dead-of-night vandalism and worse by unknown activists, this corporation and the government formed an alliance to destroy the group. The FBI began an unprecedented campaign of surveillance in preparation for prosecution, creating a model that would later be used against Occupy Wall Street and Black Lives Matter. Congress, under corporate influence, rewrote laws and bent the definition of incitement in order to accomplish the prosecution of

these six, potentially weakening free speech rights for all Americans. Featuring expansive interviews with the activists spanning over a decade, rare archival footage – including never-before-seen FBI undercover surveillance tapes, wiretaps and government documents, The Animal People is a chilling portrait of what happens when activism rattles the institutions of power. Co-director Casey Suchan (Denis Henry Hennelly) joins us to talk about their bellwether film that puts the anti-accountability campaign engineered by large corporate interests and the supine partnership with complicit government agencies on full display.

“EYE-OPENING… will stick with you long after you’ve watched.”– Shuffle