In 1943 a young British officer, Norman Lewis, entered a war-torn Naples with the 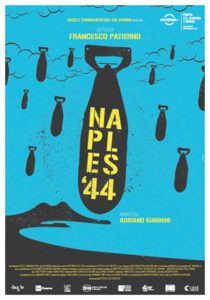 American Fifth Army. Lewis began writing in his notepad everything that happened to him during his one-year stay observing the complex social cauldron of a city that contrived every day the most incredible ways of fighting to survive. These notes turned into the masterpiece NAPLES ‘44. This film adaptation imagines Lewis returning to the city that charmed and seduced him many years later. Filmmaker Francesco Patierno combines riveting archival war footage with clips from movies set in Naples from the 1950s and 60s (featuring Marcello Mastroianni, Alan Arkin, Ernest Borgnine) and Oscar-nominated

actor Benedict Cumberbatch narrating a portray of a city that was as much a victim of the war as any individual, but that has come back to life with all the charisma of Vesuvius, its very own volcano. This visionary reminiscence is made up of flashbacks between the places of the present that Lewis revisits and the stories of the past. Cumberbatch gives life to Lewis’ words through the stories and fortunes of the people he meets, by the end of this intimate nostalgic journey we can fully share with him a deep feeling for the city. Director Francesco Patierno and Producers Francesca Barra and Davide Azzolini stop by to talk about this stunning, intimate evocation of a time and place from the not-too-distant past that has much to teach us today.

“A riveting film, a complex portrait of the mystery of Naples.” – Corriere della Sera

“If it weren’t for the time-chiseled patina on the footage dug out from archives, the powerful images of Vesuvius erupting, or the Caravaggio-esque faces of the faithful praying, there really wouldn’t be much difference between the Naples of this time and the cities martyred by the conflicts of today, like Aleppo, like Mosul.” – Il Mattino

“Naples ’44 is a harrowing portrait of a defiant population which after suffering great losses, finally drove out its Nazi occupiers, and did survive.” Patrick McGrath, New York