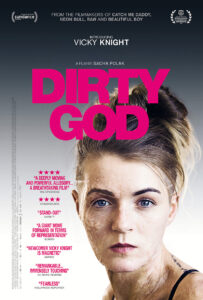 who must pick up the pieces after an acid attack leaves her with severe facial burns. Prior to the attack, with limited education and opportunities, Jade’s main currency was her looks. Her face has been reconstructed, but her beauty is gone. Jade must set about rebuilding herself – and this is a gargantuan task. Cast adrift from her young daughter, Jade finds solace in the hidden world of online liaisons where she uncovers the passion and connection she’s craved in an often humorous and celebratory way. However, the actions of a stranger threaten to turn

her life upside down once more, and those around her are ill-equipped to halt her descent. As family life and friendships start to crumble, her lowest ebb proves the inspiration that Jade needs. Jade takes drastic action, finally finding her path back to her daughter and herself. Finalist for the 2019 Sundance Grand Jury Prize (World Cinema Dramatic) DIRTY GOD is a powerful film about motherhood, courage and self-acceptance.  Director Sacha Polak joins us for a conversation on how Jade’s story resonated with lead actor Vicki Knight’s own recovery and the trust and bonding that the entire cast and crew experienced during the making of this compelling film.

For news, updates and screenings go to: modernfilms.com/dirtygod

Dark Star Pictures will release DIRTY GOD with a virtual release through Laemmle Theaters in LA, Gateway Film Center (Virtual) in Columbus, and more theaters to be announced on November 13, 2020. The film will also be made available on digital platforms such as iTunes, Amazon, Google Play, Fandango Now, Direct TV, and through local cable providers on December 15, 2020.

“Knight’s fiery, sensitive performance ignites the core of a movie that has a lot to say, but never sacrifices an ounce of truth in order to make its point.” – Tom Beasley. Flickering Myth

“In a frank but sensitive way, [Sacha] Polak delves into areas that most other filmmakers would be far too timid to go near.” – Geoffrey Macnab, Independent (UK)

“Knight’s Jade feels authentic in her mood swings, from frustrated to questioning, from hopeful to devastated and back, sometimes within a single scene.” – Boyd van Hoeij, Hollywood Reporter

“Dirty God isn’t always an easy watch, but it’s a rewarding one that marks both Knight and Polak as exceptional talents.” – Anna Smith, The List