Echoes of the Empire: Beyond Genghis Khan offers a stunning cinematic view of 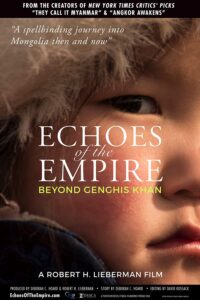 Mongolia’s past and present. Film director and novelist Robert H. Lieberman takes us into this vast country little known by many. New York Times best-selling author Jack Weatherford opens the film, leading us through the remarkable evolution of Genghis Khan’s Mongol Empire. Intimate portraits of today’s Mongolians provide us with rare and revealing insights into the minds of these former warriors and nomads and the challenges they face in their post Soviet world. Echoes of the Empire: Beyond Genghis Khan is the third in the trilogy of films from the 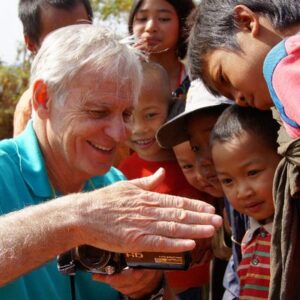 creative team at PhotoSynthesis Productions that includes the acclaimed Angkor Awakens and They Call It Myanmar – hailed as New York Times Critics’ Picks. Director Robert Lieberman (Angkor Awakes, They Call It Myanmar) stops by to talk about largest and most consequential empire in human history led by a man who commanded a disciplined army, deployed brilliant military tactics, elevated the status of women within the empire and created an enduring legacy that continues to inform the lives of modern Mongolian society.

For news, updates and screenings go to: echoesoftheempire.com

Echoes of the Empire: Beyond Genghis Khan was directed by Robert H. Lieberman and has a running time of 90 minutes. The film will be distributed by Journeyman Pictures in Washington DC on June 3 at the Landmark Theatre, E Street Cinema, and in Los Angeles on June 10 at the Laemmle Monica Film Center. Additional theatrical dates to be announced soon.

About the filmmaker – For over a half century Robert H. Lieberman has been writing critically acclaimed novels, including the best-sellers “Paradise Rezoned” and “Baby.” Lieberman, a long time member of the Cornell University Physics faculty, is the recipient of the John M. and Emily B. Clark Award for Distinguished Teaching. He has been awarded a series of Fulbright Lectureships and Senior Specialist posts in Europe and Southeast Asia. In addition to Echoes of Empire he has directed “Angkor Awakens — A Portrait of Cambodia” a feature documentary that is a psychological examination of the country’s psyche, its turbulent history and present day reality. “They Call It Myanmar”, featuring Nobel Prize  winner Aung San Suu Kyi. “Green Lights,” a feature comedy. “Last Stop Kew Gardens” a tale of the “Americanized” kids of Holocaust survivors. “Faces In A Famine” shot during the height of the Ethiopian Famine. and “Boyceball” a documentary that follows a piece of choreography from conception to performance.

“Starting with the personal and intimate origin story of Genghis Khan, Lieberman weaves a rich and close-knit tale of the entire history of the Mongolian people—effortlessly mixing past, present and future in its entire epic splendor.” – Karsten Kastelan, German Film Critics Association

“Absolutely, the best documentary ever made on Mongolia…Digs past the stereotypes. I think this will be important long into the future.” – Jack Weatherford, New York Times bestselling author, “Genghis Khan and the Making of the Modern World.”

“What a beautiful film. I have seen lots of films about Mongolia but this is the first time I really learned something new about this country and its people.” – Nina Gladitz, author and filmmaker, “Leni Riefenstahl: Career of a Perpetrator.”