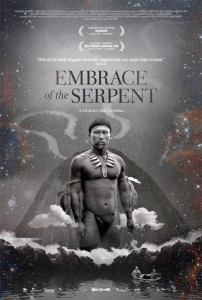 The **2016 Academy Award nominated Best Foreign Language Film is at once blistering and poetic in its examination of the ravages of colonialism and the dark shadow it casts over the South American landscape in EMBRACE OF THE SERPENT. It is director Ciro Guerra third film and the first film shot in the Amazonian rainforest in over 30 years. Filmed in stunning black-and-white, the film centers on Karamakate, an Amazonian shaman and the last survivor of his people, and the two scientists (Evan and Theo, portrayed by Brionne Davis and Jan Bijvoet) who, over the course of 40 years, build a friendship with him. The film was inspired by the real-life journals of two explorers (Theodor Kock-Grünberg and Richard Evans Schultes) who traveled through the Colombian Amazon during the last century in search of the sacred and difficult-to-find psychedelic Yakruna plant. EMBRACE OF THE SERPENT premiered in the Directors’ Fortnight section of the 2015 Cannes Film Festival, where it was awarded the top prize, the CIACE Art Cinema Award, and is Colombia’s official Oscar® entry for Best Foreign Language Film. Director Ciro Guerra and Brionne Davis stop by Film School to talk about the many challenges of filming in the jungles of Brazil and the rewards of shining a spotlight on the brutality of European colonial dominance over indigenous people.

For news and updates go to: embraceoftheserpent.oscilloscope.net

“Shot on sumptuous Super 35, the black and white photography lends itself to the film’s sorrowful ode to a world devastated, but it is the ceaseless teeming life of the soundtrack that transports the audience into the midst of the rainforest.” – Ben Nicholson, CINEVUE

“A visual astonishment… There’s no denying the film’s chastening moral conviction or the transfixing power of its black-and-white imagery.Not just an ethnographic study but also a striking act of cinematic witness.” – Justin Chang, Variety

“‘Embrace of the Serpent’ is simply a work of art, and one of the most singular cinematic experiences you could hope to have in Cannes, or anywhere really. It’s an absorbing, even thrilling head trip. It is a Heart-of-Darkness voyage of discovery. It is a lament for all the lost plants and peoples of the world.” – Jessica Kiang, Indiewire’s “The Playlist”