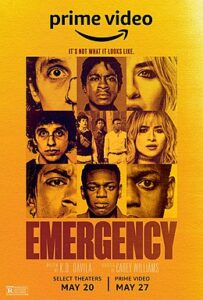 friend, Sean (RJ Cyler), as they ready themselves for an epic night of Spring Break parties. Sean has the whole night planned out, including every party they will hit on their “legendary tour.” Kunle is down, yet mostly concerned with finishing up his mold experiment in his lab, as his acceptance to Princeton is hinging on the results. They return

to their apartment to pre-game, yet find that their roommate, Carlos (Sebastian Chacon), left the door open. As they enter with trepidation, Sean and Kunle discover a drunk, semi-conscious White female they don’t know on the floor and an oblivious Carlos, who didn’t hear her come in over the videogame blaring in his ears. The moral and practical dilemma of what these three men of color should do with the

incapacitated white girl sets in motion a wildly fraught journey through the social, political and racial landscape of America in 2022. Director Carey Williams (Cherry Waves, Emergency (short)) joins us for a lively conversation on his collaboration with screenwriter KD Davila, and how he pulled together an amazingly talented cast newcomers to help him deliver a multi-layered, funny, terrifying, and thrilling cinematic ride.

For updates and screenings go to amazonstudios.com/emergency

For theatre tickets go to: emergencymovie.com

For more on Carey Williams go to: cdubfilms.com

About the filmmaker – Hailed by Filmmaker Magazine as one of 2018’s New Faces of Independent Film, Carey Williams is a director bringing a unique and visually striking cinematic eye to the exploration of the human condition. Williams’ short film Cherry Waves won Best Short awards from HBO, NBC Shortcuts, San Diego Film Festival, as well as Best Narrative from Holly shorts Film Festival. He premiered his feature R#J, a modern-day retelling of Romeo and Juliet, at the 2021 Sundance Film Festival and recently completed the feature version of his 2018 Sundance and SXSW Award-winning short film Emergency. For more go to: cdubfilms.com

“An electrifying and thought-provoking ride.” – Carlos Aguilar, The Wrap

“A thrilling comedy of errors. You can’t help but laugh at the riveting absurdity.” – Siddhant Adlakha, IndieWire

“The film’s great accomplishment is in how it infuses depth and emotion into its characters so that we may see them for exactly who are: human beings.” – Allen Almachar, The MacGuffin

“It’s one of the most potent commentaries about racism and brotherhood bonds yet.” – Randy Myers, San Jose Mercury News