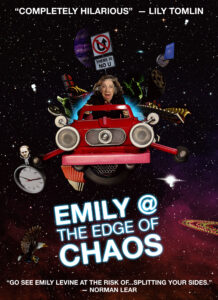 animation, appearances by scientists, and animated characters (John Lithgow as Sir Isaac Newton, Lily Tomlin as Ayn Rand, Leonard Nimoy as Sigmund Freud, Richard Lewis as Aristotle, Matt Groening as Aldo Leopold). Emily @ the Edge of Chaos uses physics, which explains how the universe works, to explain our metaphysics – the story of our values, our institutions, our interactions. Using her own experience and a custom blend of insight and humor, provocation and inspiration, personal story and social  commentary, Emily takes her audience through its own paradigm shift: from the Fear of Change to the EDGE OF CHAOS! Emily

Levine, like her film, was one-of-a-kind. She was a television writer and producer (Designing Women, Love & War and Dangerous Minds), a stand-up performer, and an out-of-the box-thinker,

whose brilliant TED Talks have been watched by millions. She made this film with Wendy Apple, who produced and directed it. Wendy died in 2017 and Emily continued working on the film until she also passed away in 2019. Executive Producer Thea Kerman joins us to talk about how her friend and colleague, Emily Levine, poured her heart and should into making this film before cancer took her, and how the unexpected death of the director Wendy Apple played into Thea stepping in to guide the film to completion and distribution.

Opening Friday, May 7 nationwide in virtual cinemas through KINO MARQUEE

Featuring the voices of comic luminaries:

About Emily Levine – Emily graduated cum laude from Harvard, intent on pursuing a career as an Oracle. Unable to find a good Oracle agent, she settled for a career as a stand-up comedian, headlining in comedy clubs and making television appearances on shows such as David Letterman’s Late Night. The LA Times called her “a stand-out as a stand-up.” Newsweek called her “one of the new queens of comedy.” Her mother called her every week. Later, as a television writer and producer, Emily worked on shows such as Designing Women, Love and War and Dangerous Minds. She created and produced pilots for new situation comedies for CBS, NBC, ABC and HBO. In the 90’s, Emily’s career began to suffer as an undiagnosed tumor in her pituitary gland began to wreak havoc. Lacking an explanation for the weird array of symptoms, including brain fog, osteoarthritis, and a curious lack of interest in consumer-driven activity, she could only believe she was going crazy. The relief that accompanied the eventual diagnosis in 2007 – the fact that there was an actual real reason for her decline – led Emily to fall in love with fact-based reality, aka science. Her movie, “Emily @ the Edge of Chaos,” details this journey, using humor, animations, and guest stars to inspire the country with that same love of fact-based reality.  Emily was diagnosed with stage IV lung cancer in 2018 and started a blog, “The Yoy of Dying,” that takes it all on. Emily died on February 3, 2019, but Emily’s daughter Abby continues working to release “Emily @ the Edge of Chaos.”  You can subscribe to Emily’s Universe and continue to follow Emily’s accounts on Twitter, Facebook, and Instagram to stay up-to-date. For more about Emily go to: emilysuniverse.com

About the filmmaker – Thea Kerman, Executive Producer, has over 30 years of experience as an entertainment lawyer. She has provided legal services for narrative films such as Donnie Brasco, The Fisher King, Hook, Hairspray, Warriors of Virtue, Bats and Black Dynamite, documentary films such as The Cutting Edge: The Magic of Film Editing and Queen of Hearts: Audrey Flack and worked with clients and talent such as Akiro Kurasawa, Barry Levinson, Sidney Lumet, Bruce Willis, Richard Gere, Al Pacino, Whitney Houston and Kiss. Prior to establishing her own law firm in 1990 in Los Angeles, Ms. Kerman was the Senior Production Counsel for Tri-Star Pictures and served as General Counsel for the Marvel Comics Group.. She was a co-producer on Dukhtar, a U.S./Pakistani/Norwegian/Indian narrative co-production which had its world premiere at the Toronto Film Festival and was the official Pakistani nominee for Best Foreign Language Film at the 87th annual Academy Awards. She was an executive producer of Doctors of the Dark Side, a feature length documentary, and co-producer of Yellow Rose, an American-Fillipino musical drama.

“Witty, whimsical, deeply thoughtful and, most of all, COMPLETELY HILARIOUS.” – Lily Tomlin

“Go see Emily Levine at the risk of BLOWING YOUR MIND, SPLITTING YOUR SIDES, and exiting a better person.” – Norman Lear

“If you don’t get Emily Levine’s smart comedy, you’re an IDIOT!” – Matt Groening