An official selection of the 2022 Tribeca Film Festival, ENDANGERED 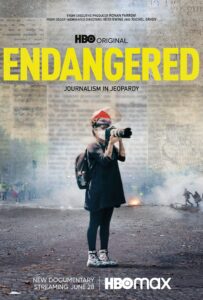 chronicles a year in the life of four journalists living and working in three  democratic countries, Mexico, Brazil

and the United States, where freedom of the press has historically been considered a “given” is now a state of rapid decline. As newsrooms shutter around them, misinformation proliferates, and world leaders brazenly suppress free speech, reporters Patrícia,

Carl, Sáshenka, and Oliver face harrowing circumstances more likely encountered in war zones or autocratic states than in a functional democracy.  Joining us in conversation are Co-directors Rachel Grady (Boys of Baraka, One of Us) and Heidi Ewing (Jesus Camp, Love Fraud) to talk about the crisis of misinformation, intimidation by law enforcement, deadly targeting by paramilitary groups, imprisonment and dwindling readership.

About the filmmaker – Heidi Ewing is the co-director of Jesus Camp, The Boys of Baraka, 12th & Delaware, DETROPIA, Norman Lear: Just Another Version of You (Sundance Film Festival), One of Us (Toronto International Film Festival), and the series Love Fraud (Sundance Film Festival). Ewing’s first narrative feature, I Carry You With Me (Te Llevo Conmigo), had its world premiere at the 2020 Sundance Film Festival where it won the jury and audiences awards in the NEXT section. The film was nominated for two Independent Spirit Awards and will be released by Sony Pictures Classics in 2021. Heidi is currently co-directing a film for HBO on the silencing of journalists around the world. lokifilms.com

About the filmmaker – Rachel Grady is the co-director of Jesus Camp  (Academy Award nominee), The Boys of Baraka (Emmy nominee), 12th & Delaware  (Peabody Award winner),  DETROPIA (Emmy winner), Norman Lear: Just Another Version of You (2016 Sundance Film Festival), One of Us (2017 Toronto International Film Festival), and the Showtime docuseries,  Love Fraud, which had its world premiere at the 2020 Sundance Film Festival and was nominated for an Independent Spirit Award. Rachel is currently co-directing a film for HBO on the silencing of journalists around the world. lokifilms.com

“Endangered might not be groundbreaking but it is one of the most important films you’ll see in 2022 about the importance of a free press.” – Danielle Solzman, Solzy at the Movies

“Endangered is a timely, seething view at an industry under siege. It is extremely well edited, merging the stories of four journalists together, weaving a web of infuriating evidence that our freedom of press is in an urgent state of collapse.” – Mark Johnson, Awards Daily

“An eye-opening and often enraging glimpse at four journalists attempting to do their jobs circa 2020 and the attacks they endure as a result.” – Peter Sobczynski, RogerEbert.com

“The brave reporters the filmmakers follow worry for their own safety and their families, but charge on, determined to help keep democracy alive. It’s an eye-opener, it gnaws at our sense of justice yet there are moments of great inspiration.” – Anne Brodie, What She Said

“You can tell the filmmakers, like their subjects, are struggling to suppress a scream.” – Dennis Harvey, Variety