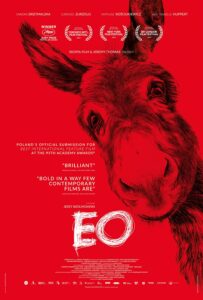 End, Moonlighting) directs one of his most free and visually inventive films yet,

following the travels of a nomadic gray donkey named EO. After being removed from the traveling circus, which is the only life he’s ever known, EO begins a trek across the Polish and Italian countryside, experiencing cruelty and kindness in equal measure, all the while observing the follies and triumphs of humankind. During his travels, EO is both helped and hindered by a cast of characters including a young Italian priest (Lorenzo Zurzolo),  a Countess (Isabelle Huppert), and a rowdy Polish soccer team. Loosely inspired by Robert Bresson’s Au hasard Balthazar, and featuring immersive, stunning cinematography by Michal Dymek coupled

with Pawel Mykietyn’s resonant score, Skolimowski’s film puts the viewer in the perspective of its four-legged protagonist. EO’s journey speaks to the

world around us, an equine hero boldly pointing out societal ills, and serving as warning to the dangers of neglect and inaction, all while on a quest for freedom. Director Jerzy Skolimowski and Writer Ewa Piaskowska join us for a conversation on EO’s jolting and sublime trek across the Polish and Italian countryside, as well as his collaboration with his filmmaking team, including cinematographer Michal Dymek, composer Pawel Mykietyn and writer / partner Ewa Piaskowska to burnish this heartfelt cinematic masterpiece.

For more go to: eo.official.film

To watch in a theatre go to: eo.official.film/buy-tickets

About the filmmaker – Jerzy Skolimowski is a Polish film director, screenwriter, dramatist and actor. A graduate of the prestigious National Film School in Łódź, Skolimowski has directed more than twenty films since his 1960 début, THE MENACING EYE. In 1967 he was awarded the Golden Bear prize for his film THE DEPARTURE. Among his other notable films is DEEP END (1970), starring Jane Asher and John Moulder Brown. He lived in Los Angeles for over 20 years where he painted in a figurative, expressionist mode and occasionally acted in films. He returned to Poland, and to film making as a writer and director, after a 17-year hiatus with FOUR NIGHTS WITH ANNA in 2008. He received the Golden Lion Award for Lifetime Achievement at the 2016 Venice Film Festival.

About the filmmaker – Screenwriter / Producer Ewa Piaskowska has produced the last four Jerzy Skolimowski’s films, and co-wrote three of them. She is the co-owner of Skopia Film. She is a graduate in Art History from the University of Warsaw and the Film, Television, Video and New Media program at UCLA.

“EO is a thrillingly imaginative piece of filmmaking: a strange, haunting epic about a donkey that couldn’t feel more of our moment.” – John Powers, NPR

“EO may be one of the greatest movies ever made about the spirit of animals, as much as we can know it.” – Stephanie Zacharek, TIME Magazine

“In its relentless pursuit of disorienting audiences and unmooring them from narrative conventions, EO compels us to see the world differently, and therefore helps us see it from a perspective outside our own.” – C.J. Prince, Globe and Mail

“It left me shattered… just being there, quietly weeping, with others gave me a sense of communion… the kind that I always feel when I got to the movies, sit in the dark and have my world and mind blown.” – Manohla Dargis, The New York Times

‘“EO” is a damning polemic on our relationship to other intelligent species — as free labor, food and companions — as seen through the dewy, wide eyes of a donkey whom we come to adore.’ – Peter Debruge, Variety