EPICENTRO, a richly textured portrait of the resilient people of Cuba 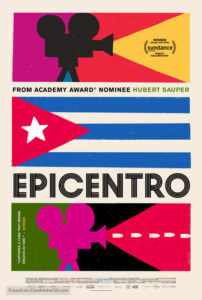 colonial dominance in the Americas and ushered in the era of the American Empire. At the same time and place, a powerful tool of conquest was born: cinema as propaganda. In his latest film, Hubert Sauper explores a century of interventionism and myth-making together with the extraordinary people of Havana—who he calls “young prophets”—to interrogate time, imperialism and cinema itself.

For news, screenings and updates go to: kinolorber.com/film/epicentro

About the filmmaker: Hubert Sauper is an Academy Award–nominated director, cinematographer, writer, and producer living in France. Best known for his documentaries We Come As Friends (2014) and the Academy Award-nominated Darwin’s Nightmare (2004), he has been recognized for his work with more than 50 film awards, among them a European Film Award, a French César, and awards at the Berlin, Venice and Sundance film festivals. Hubert is a visiting professor at several universities, including Harvard, Yale and Columbia.

“A brilliant mixture of historical-poetic analysis and a ground-level journey among the denizens of Havana… The director’s remarkable eye for lived-in detail and for spectacular imagery will mesmerize you.” – Bilge Ebiri, Vulture

“Acclaimed nonfiction filmmaker Hubert Sauper turns his rigorous but compassionate gaze on this fascinating place in Epicentro… Sauper and his co-editor… work the material with a remarkable fluidity and gracefulness that’s consistently engaging and surprising.” – Leslie Felperin, The Hollywood Reporter

“[A] tender portrait of Cuba. Politics, people and the power of cinema are brought together to create a mosaic-like reflection on Cuba’s history… Epicentro shines in Sauper’s many encounters with the people of Cuba.” – Alan Hunter, Screen International