In Emerson Moore’s latest film, ESCAPE THE FIELD, the fear is inescapable 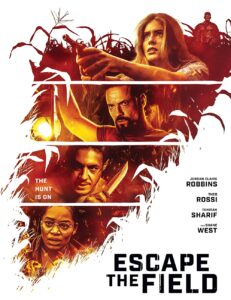 and the suspense non-stop when six complete strangers suddenly awaken in a remote, endless cornfield. Stripped of their possessions, they are left with only six items: a gun with a single bullet, matches, a lantern, a knife, a compass, and a flask of water. As mysterious sirens blare in the distance and traps appear at every turn, the group realizes it’s been plunged into a cat-and-mouse game with an

unseen evil, and survival depends upon solving a diabolical – and deadly – puzzle in this non-stop, horror thriller. ESCAPE THE FIELD is careful balance of drama, tension and fear, combined with survival, anticipation and violence. Inspired by films like Jaws, The Ring and The Conjuring, director and co-writer Emerson Moore creates strong characters and a visual style that is kinetic – forward momentum with presence and purpose.

For news and screenings go to: lionsgate.com/escape-the-field

About the filmmaker – Director-Writer-Producer Emerson Moore was born and raised in Los Angeles. After finishing college at Old Dominion University and opting out of film school at NYU for real world experience, he headed back to Los Angeles and began his career in the film industry with a position at Cognito Films. While at Cognito Films he worked under multiple directors, including Danny Boyle and Gary Weiss, on several projects and commercials. This provided rapid fire experience in filmmaking processes from start to finish and exposure to multiple different styles of directing. After Cognito Films, he moved to Original Films commercial and music video department. Here he honed in on visual storytelling, style and emerging digital formats. In 2002 he founded 342Media, a design and production company. A quick success, known for outstanding creativity, the company quickly grew to ten employees. Through 2007 Emerson wrote, directed and produced original and supplemental content for clients such as Disney, Paramount, Fox, Sony and Lionsgate.  In 2007, Emerson founded Anacapa Pictures and produced his first feature film, THE FORLORN (Starring: Crispin Glover, Clayne Crawford, Mark Boone Junior and Christian Kane). Since then, he has produced over ten feature films including, ASSASSINATION NATION (Starring: Bill Skarsgard, Suki Waterhouse, Maude Apatow and Joel McHale), GHOSTS OF WAR (Starring: Brenton Thwaites and Theo Rossi), and THE MONSTER (Starring: Zoe Kazan and Scott Speedman).