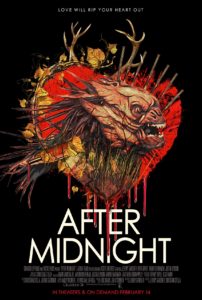 relationship with Abby (Brea Grant) has been storybook-quality. Abby, however, wants more: marriage, to be exact, which Hank doesn’t seem ready to initiate anytime soon. As a result, she leaves him without so much as a note or any subsequent communication. Hank is crushed. Even worse, Abby’s departure seemingly triggers the arrival of an unseen monster that claws at Hank’s front door

at night. As the nocturnal threat intensifies, Hank must figure out how to not only save his relationship, but also himself. Co-director Christian Stella (Jeremy Gardner) stops by to talk about the multi-layered film that is After Midnight (Something Else) and his creative cinematography that gives the film its lyrical power.

For news and updates go to: facebook.com/somethingelsefilm

“Something Else promises monsters but delivers more demons of the human experience variety, as this sweet and sincere creature feature is far more romantically heartfelt than expected.” – Matt Donato, We Got This Covered

“Sublime and emotional, Something Else is one hell of a love story, a nightmarish monster movie, and an overall fantastical experience.” – Michelle Swope, Dread Central

“There’s an honesty in Something Else that makes this man against (his) monsters story one that’ll give you deep meaning, beautiful cinematography, and just the right amount of wtf.” – Kristy Strouse, Film Inquiry