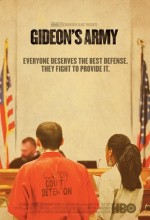 Film Independent Spirit Award nominee and winner of a Sundance Film Festival award, GIDEON’S ARMY follows the personal stories of Travis Williams, Brandy Alexander and June Hardwick, three young public defenders who are part of a small group of idealistic lawyers in the Deep South challenging the assumptions that drive a criminal justice system strained to the breaking point. Backed by mentor Jonathan “Rap” Rapping, a charismatic leader who heads the Southern Public Defender Training Center (now known as Gideon’s Promise) they struggle against long hours, low pay and staggering caseloads so common that even the most committed often give up in their first year. Director Dawn Porter joins us to talk about her compelling film and a barely functional judicial system.

For the latest news on Gideon’s Army go to: gideonsarmythefilm.com

“The soldiers of ‘Gideon’s Army,’ Dawn Porter’s stirring debut docu, are public defenders  —  lawyers who dedicate themselves to representing the indigent, and regularly answering the question, ‘How can you defend those people?’ Like the film itself, Porter’s handful of devoted, charismatic attorneys do a righteous job of reminding people that the accused are innocent until proven guilty, and that the criminal justice system seems otherwise disposed.”– Variety

“In this comprehensive revelation of the craziness and dysfunction of the world of public defenders, filmmaker Porter sagely shows us the personal toll it takes on the lawyers. Overall, Gideon’s Army is an eye-opening insight into a judicial hellhole world that ordinary citizens can never imagine.  Throughout the unsung heroism of these three warriors in the legal trenches is fittingly stirred.” – The Hollywood Reporter

“Do yourself a favor and watch this gripping and beautiful film. If the inequitable system to which they have dedicated themselves doesn’t make you proud to be an American, the dramatic stories of these young lawyers will.” – Esquire