In a desolate stretch of the Sahara, a mysterious car accident leaves a young woman 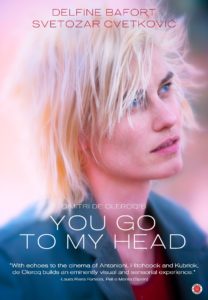 (Delfine Bafort) lost and alone. Jake, (Svetozar Cvetkovic) a reclusive architect, finds her unconscious. He drives her to the nearest doctor, to discover that she’s suffering from post-traumatic amnesia. Intoxicated by the woman’s beauty, Jake claims to be her husband. He names her Kitty and takes her to his remote desert home to recuperate. As Kitty struggles to come to grips with who she is, Jake invents an elaborate life they can share – the life he has always yearned for. Little by little, Kitty begins to fall in love with him. But when shreds of her past begin to surface, Jake increasingly fears losing the love of his life. Director Dimitri de Clercq joins us to talk about the twisted story of love, perception, illusion and identity that is You Go To My Head.

producing Ray Müller’s controversial documentary The Wonderful, Horrible Life of Leni Riefenstahl. A native Belgian, de Clercq grew up in the Middle East before majoring in film direction and production at New York University’s Tisch School of the Arts. In 2002, he started his own production company, CRM-114, named in homage to maverick filmmaker Stanley Kubrick. De Clercq’s fascination with the desert led him to produce several award-winning films set in desolate environments, including Afghan writer-director Atiq Rahimi’s Earth and Ashes (2005) and Iraqi director Mohamed Al-Daradji’s Son of Babylon (2009). The sepia-hued, parched wilderness of the desert was also a key inspiration for You Go To My Head, de Clercq’s feature film directorial debut.

For news and updates go to: You Go To My Head.com

For the best in independent feature films go to: firstrunfeatures.com

See You Go to My Head at the Laemmle Glendale starting Friday, February 21

“You Go to My Head is a warped and lush tale of obsession, deception, and romance that’ll certainly go to your head. It’ll just take some time.” – Andrew Stover, Film Threat