FERAL tells the story of Yasmine (Annapurna Sriram), a homeless woman living in 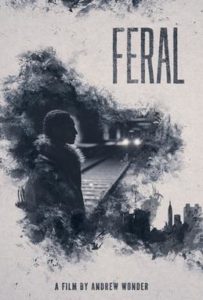 the tunnels underneath Manhattan’s West Side. Surviving on her own terms while trying to build a new life alone, she is reeling from the loss of her mother, who was deported when she was 16. Older now, Yasmine, struggles to rise from poverty as the perils of the underground fill her with despair. Along her journey, Yasmine meets a cast of characters and real New York personalities, each living in their own form of exile: a lonely piano player who’s never played his music out loud; a mother who regrets the birth of her six-year-old; a lonely grandmother nostalgic

for her salsa music past and the Mission who is there to help, but only if she’s willing to play by their rules. Based on actual stories of living underground and working with former homeless individuals, FERAL peers deep into Yasmine’s emotional reality, staring this bold young woman directly in the eyes as she struggles to carry on. Lead actor Annapurna Sriram stops by to talk about her theatre background, adapting to working in a cramped, underground setting and collaborating with director and writer Andrew Wonder.

About – Annapurna Sriram, (Yasmine) Nashville-born actor, writer, and director, landed her first agent at thirteen in Nashville, Tennessee.  After turning eighteen, Annapurna left Nashville and headed to Rutgers’ Mason Gross School of the Arts, where she studied for a year at London at Shakespeare’s Globe Theater, and was chosen to perform as part of the Sam Wanamaker Festival. Recent stage credits include the origination of “Reshma” in Jesse Eisenberg’s “The Spoils,” which was directed by Scott Elliot for The New Group and later reprising that role on the West End in London and Wallace Shawn’s United States premiere of “Evening at the Talkhouse.” 2019 has been a banner year for Annapurna, as two of her projects have been getting international attention. Her performance in the 2019 film Feral was her first lead role in a narrative feature film, and after its premiere at the Sarasota Film Festival, the film has been featured at the Sidewalk Film Festival, Bushwick Festival (where she won the Best Actor Award), and The Montreal Festival du Nouveau Cinema World Film Festival garnering excellent accolades from critics for her work. Her short film, Dom, won the Sidewalk Film Festival as “Best Narrative Short,” and has been programmed at the Brooklyn Film Festival, LES Film Festival, Indie Memphis, and the Cucalorus Film Festival. Annapurna resides in New York City, where she is currently working on films as writer, director and actor.

“Sriram is extraordinary in her role as Yazmine and carries the film on her own.” – Deirdre Crimmins, High Def Digest

“Annapurna Sriram is truly captivating as Yasmine. Her striking beauty is juxtaposed with her fierce attitude, but as the film progresses she also exhibits a serene spirituality coupled with a heartbreaking vulnerability. Like a force of nature in her own right, she flows and crashes into other denizens of the city. ” – Alec I. Gillis, Lewton Bus

“Sriram’s performance is exceptional; she completely embodies Yazmine, in her moments of loneliness, self-entertainment, brutality, pain, and brief moments of joy. We never doubt her completeness as a character, even if our view of her ranges from sympathy to anger to laughter. ” – Shelagh Rowan-Legg, Screen Anarchy