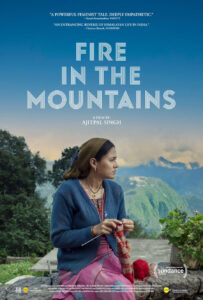 takes us to northern India, where a breathtakingly beautiful Himalayan community attracts tourists by co-mingling South Asian and Swiss Alps aesthetics. In his debut feature film director and writer Ajitpal Singh tells an unconventional story of feminist strength while showcasing the Munsiyar region that provide spectacular exteriors and intimate interiors. Chandra (Vinamrata Rai) competes with her neighbors for business while battling the strictures of patriarchy, a local infrastructure from hell, and religious superstitions. She saves money, uses feminine wiles to subvert the corrupt

powers-that-be, and piggy- backs her son up and down the mountainside to medical appointments with condescending doctors. In the end, our heroine’s tightly wound grit must find release… in triumph,

or madness, or both. Director Ajitpal Singh joins us to talk about the beautifully modulated handheld camerawork and seamless tracking shots, capturing the beauty and hardship of the villager’s daily lives and  Vinamrata Rai’s commanding and brilliantly calibrated performance as Chandra, a woman unafraid to stand her ground and find ways forward for her family and village.

For updates and screenings go to: kinolorber.com/fire-in-the-mountains

About the filmmaker – Ajitpal Singh is a self-taught filmmaker living in Mumbai. Born in Punjab, Ajitpal was a young boy when his father’s cinema in Bathinda suffered huge losses during the Punjab insurgency of the 1980s and 90s. The family was forced into a move to an Ahmedabad ghetto in Gujarat, where they lived amid poverty and violence. Ajitpal overcame these early barriers to study chemistry, theatre and photography, before choosing filmmaking to express himself creatively. His first feature film which he wrote and directed, Fire in the Mountains (2021), premiered at the 2021 Sundance Film Festival, where it was nominated for a Grand Jury Prize in the World Cinema – Dramatic competition. It went on to play at more than 30 film festivals around the world and win numerous awards. Kino Lorber has acquired the film and will release it theatrically in North America and Canada from May 2022. Ajitpal directed his debut web series Tabbar (2021) which is streaming on SonyLIV.  In 2018, his short film Rammat Gammat won two honours at the prestigious Oberhausen International Short Film Festival and is now available to watch on Mubi.

“A warm-hearted, unsentimental portrait of a struggling family in the foothills of the Himalayas. Engaging characters, beautiful landscapes and confident storytelling. Singh constantly underlines the ironies and realities for Indian families living far from city centers. There is an echo of some John Ford classics… or the films of Satyajit Ray or Hirokazu Kore-eda” – Allan Hunter, Screen Daily

“An entrancing reverie of Himalayan life in India. Like PATHER PANCHALI in the age of AirBnb and TikTok, FIRE IN THE MOUNTAINS emphatically dramatizes the struggles that locals face in a place where tourists come to play.” – Christian Blauvelt, IndieWire

“An enigmatic and intoxicating experience. Singh weaves a subtly complex narrative through a family’s multicultural conflict between healing through science versus religious faith. (With) hypnotic and captivating directorial flair that serves to create a transcendent climax.” – Diego Andaluz, The Film Stage