Katia and Maurice Krafft loved two things — each other and volcanoes. For two 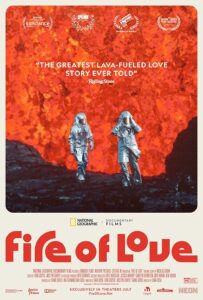 decades, the daring French volcanologist couple roamed the planet, chasing eruptions and documenting their discoveries. FIRE OF LOVE tells a story of primordial creation and destruction, following two bold explorers as they venture into the unknown. FIRE OF LOVE tells the extraordinary love story of intrepid French scientists Katia and Maurice Krafft, who died just as explosively as they lived — capturing the most spectacular imagery ever

recorded of their greatest passion: volcanoes. Director Sara Dosa and the filmmaking team fashion a lyrical celebration of the intrepid scientists’ spirit of adventure, drawing from the Kraffts’ spectacular archive. Ultimately, they lost their lives in a 1991 volcanic explosion, leaving a legacy

that forever enriched our knowledge of the natural world. Director Sara Dosa (Audrie & Daisy, The Last Season) joins us for a conversation on the joy of learning about the couple, sifting through the trove of archival footage of their work, exploring personal / professional partnership they shared and giving the world an opportunity to appreciate the science and the spectacle they were willing to give their lives for.

To watch at home go to: nationalgeographic.com

About the filmmaker – Sara Dosa is an Indie Spirit Award-nominated doc director and Peabody award-winning producer whose primary interests lay in telling unexpected character-driven stories about the human relationship to non-human nature Her first feature as a director, “The Last Season,” which tells the story of two former soldiers turned wild mushroom hunters, took home a Golden Gate Award (SFIFF 2014) and was nominated for the Indie Spirit Truer than Fiction Award. In 2018, Dosa co-directed an Emmy-nominated episode of the Netflix music series Re-Mastered about Johnny Cash’s 1970 concert for Richard Nixon. Dosa’s third feature as a director, “The Seer & The Unseen,” premiered in 2019, winning awards at a number of festivals, including the McBaine Bay Area Documentary Prize (SFIFF 2019). As a producer, Dosa produced the Peabody Award-winning “Audrie & Daisy” (2016 Sundance / Netflix); and the Peabody and Emmy-nominated “Survivors” (2018 IDFA / POV). Dosa co-produced the Academy Award-nominated “The Edge of Democracy” (2019 Sundance / Netflix) as well as “An Inconvenient Sequel: Truth to Power” (2017 Sundance / Paramount), the follow up to Al Gore’s seminal 2006 “An Inconvenient Truth.” In 2018, DOC NYC named Dosa to the inaugural “40 under 40” class of documentary filmmakers to watch and was also inducted into the Academy of Motion Picture Arts & Sciences. She graduated from Wesleyan University holds a joint Masters in Anthropology and International Development Economics from the London School of Economics & Political Science. For more: signpostpictures.com

“Their passion for volcanoes, and the way they thought it might translate into helping mankind, helps us see who they really were, and the result, built largely from archival footage, is breathtaking.” – Alissa Wilkinson,

“With its quirky New Wave-adjacent cadences, Sara Dosa’s sizzling Fire of Love proves that no one can narrate a fiery romance better than Miranda July’s airily ethereal voice.” – Tomris Laffly,

“Commits to a mad embrace of destiny, with eye-searing archival footage and an appreciation of the ineffability of devotion.” – Peter Howell, Toronto Star

“With each clip, we understand Katia and Maurice’s yearning to embark on these great adventures despite the destruction that volcanoes can exact.” – Alysha Prasad, One Room With A View

“The fuel of “Fire of Love” is the volcanologist subject’s magma-proof adoration for each other and what they’ve laid eyes on.” – Carlos Aguilar, The Playlist

“If you see any documentary this year, make sure it’s this one. Films like this should be celebrated and revered, so go out and see it, in fact, see it twice” – Ty Cooper, HeyUGuys