An Tran’s barrier-breaking and encouraging documentary film FOR TOMORROW, 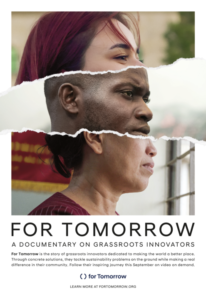 leaves behind the laboratories and fluorescent lighting and takes us into the field to change the narrative around how we / the world can solve seemingly daunting problems. Using film crews from each city, FOR TOMORROW showcases individuals on 5 different continents who are responsible for innovating at the local, grassroots level, and gives the viewer a peek into each of their unique and compelling stories as they connect with others around the world to allow their ideas to

have an even greater impact. The FOR TOMORROW initiative for celebrates and empowers people to share their creative sustainability solutions. It’s a place to connect with innovators, insights, resources, and inspiration to help build a better world for everyone. Director An Tran joins us to talk about the initiative’s overriding objective of finding solutions, empowering people from every strata of society and fostering a spirit of cooperation.

For more on the film and initiatives that make up fortomorrow.org

About the filmmaker – An Tran is a graduate of the University of Southern California School of Cinematic Arts. In 2001, she was selected by Film Independent as a Project:Involve Fellow in writing and directing. Hailing from the Midwest, Tran has produced music videos for the bands Spoon, Clearlake, and The Postal Service, along with the feature-length documentary Tran 5.  Other producing credits include the documentary Watts Up?, the short films Mad Girl’s Love Song and Elsie John, in addition to recent promos for ARRI – the world’s largest film equipment manufacturer. Things We’ve Made is a 2008 IFP Emerging Narrative Finalist and a selection of the 2010 FIND Directors Lab. It marks Tran’s first feature film narrative as producer. As a journalist, Tran has covered entertainment technology and filmmaking for the past decade. Her articles and interviews have appeared in American Cinematographer, Filmmaker, Exposure, In Camera, Videography, LAist.com, and the Los Angeles Times.