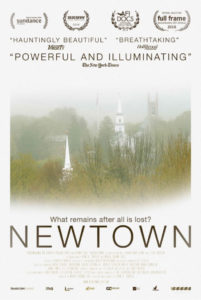 There are no easy answers in NEWTOWN – no words of compassion or reassurance that can bring back the 20 children and six educators who lost their lives during the shooting at Sandy Hook Elementary School. Instead, Director Kim A. Snyder gives us exclusive access into the lives and homes of those who lost loved ones, and others in the community who have been indelibly changed by the events. Each person, be it a parent, school nurse, or state police officer, tries in their own way to make sense of their loss, as well as confront our nation’s inability to quell gun violence in even the most peaceful of communities. NEWTOWN bears witness to their profound grief and allows it to reverberate within our collective conscience – exploring what happens to a community after it becomes the epicenter of a national discussion, and what is still left to cope with after the cameras leave. Filmed over the course of nearly three years, the film uses unique access and never-before heard testimonies to tell a story of the aftermath of the deadliest mass shooting of schoolchildren in American history. The film premiered at Sundance this year, before playing at SXSW, BAMcinemaFest and – the week of the Orlando shootings last month – at the White House. Director Kim A. Snyder stops by to talk about her touching, haunting and hopeful film.

For news and updates go to: newtownfilm.com

On November 2nd Abramorama and Fathom Events will present a special event screening in over 300 theaters nationwide, followed by a live town hall discussion moderated by CNN’s Chris Cuomo and including several members of the Newtown community.

“You won’t truly understand gun violence until you see the Newtown documentary. It is a visceral, powerful experience. You will cry. It is worth it.” – John Hendrickson, Esquire

“A shocking and compelling piece of work.” – Lanre Bakare, The Guardian

“Newtown emerges as a blistering, if tacit, indictment of the nation’s broken promise to never forget.” – Indiewire