The poignant new film by director Leena Pendharkar 20 WEEKS follows a young couple navigating their first pregnancy, who during a routine scan discover a 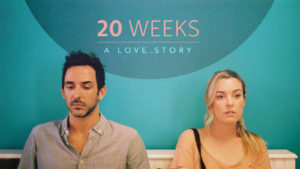 health condition that could gravely impact their baby, which forces them to re-examine their relationship and their future. 20 WEEKS gives an honest, modern and intimate look at the pressures surrounding pregnancy and relationships. The film is particularly timely as the right to choose is being threatened in today’s political climate and currently in the US, 43 states have enacted abortion restrictions

at different stages of pregnancy. The film stars Anna Margaret Hollyman (MR. ROOSEVELT, SLEEPING WITH OTHER PEOPLE) and Amir Arison (“The Blacklist”). Pendharkar’s first feature, RASPBERRY MAGIC, which starred Bella Thorne and Alison Brie, screened in more than twenty-five festivals, winning numerous awards. 20 WEEKS earned strong reviews after premiering at last year’s Los Angeles Film Festival and has been screening in various festivals across the country throughout the fall and winter. Director Leena Pendharkar stops by for a conversation on her thoughtful and intimate tale of a couple under duress dealing with crippling uncertainty.

For news and updates go to: 20 Weeks

“20 Weeks is the type of film that will spark a conversation…it raises big questions that you can’t help but think about for hours, if not days, after seeing the film… This is the very definition of brave filmmaking and is something that deserves to be seen” – Scott Menzel, We Live Entertainment

“The story of 20 WEEKS is not about the baby, but it’s about the real struggle parents face when doubt is cast over the future of their unborn child” – Alan Ng, Film Threat

“Compelling if difficult viewing for anyone interested in seeing a variety of parental experiences on screen.” – Noel Murray, Los Angeles Times