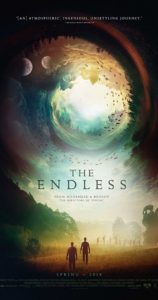 Moorhead and Benson return with this mind-bending thriller that follows two brothers who receive a cryptic video message inspiring them to revisit the UFO death cult they escaped a decade earlier. Hoping to find the closure that they couldn’t as young men, they’re forced to reconsider the cult’s beliefs when confronted with unexplainable

phenomena surrounding the camp. As the members prepare for the coming of a mysterious event, the brothers race to unravel the seemingly impossible truth before their lives become permanently entangled with the cult. Co-director Justin Benson (Aaron Moorhead) stops by to talk about this remarkably accomplished, mind-bending cinematic journey into the unknowable.

For news and updates go to: theendless-movie.com

The Endless on Social Media:

“The Endless isn’t just terrific – it’s poised to be that breakout genre hit that It Follows and The Babadook were in past years. ” – Jamie Righetti, /FILM

“The Endless will fuck your brain…Justin Benson and Aaron Moorhead deliver an enticing, mysterious genre experiment that stands to be their best work yet.”- Brad Miska, BLOODY DISGUSTING

“(Justin) Benson and (Aaron) Moorhead are in every frame of this film. Together they give the cosmos-mangling insanity a grounded truth and a light hilarity” – Richard Whitaker, Austin Chronicle

“The Endless feels like a thunderstorm. It brews slowly, softly, and then in the blink of an eye, has consumed you, booming with fury and jaw-dropping force.” – Kristy Puchko, Pajiba

“The Endless [is] a meta-commentary of the nature of storytelling and a self-examination of the creative mind, the film will likely have its audience questioning their perception of time as they look to sky for falling photographs.” – Shelagh Rowan-Legg, Screen Anarchy