Presenting Michelle Pfeiffer in one of the most acclaimed performances of her storied career, Andrew Dosunmu’s WHERE IS KYRA?  tells the story of Kyra 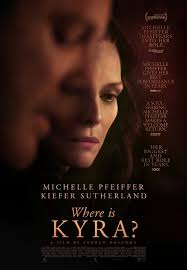 Johnson,  a middle-aged divorcee who moves into her elderly mother’s Brooklyn apartment while she looks for work and tries to get back on her feet.  When her mother suddenly dies, Kyra is left without any support, both emotional and financial, and finds herself with very few options–none of them good.  Despite a blossoming affair with a sympathetic neighbor (Kiefer Sutherland) with struggles of his own, Kyra can’t accept that her once-tidy life has fallen apart, and she resorts to increasingly desperate

measures to hold onto what little she has left. Another unique and evocative portrait of life in contemporary New York City, WHERE IS KYRA? is Dosunmu’s follow-up to his award-winning feature, Mother of George,  widely considered one of the best independent films of recent years. Re-teaming with writer Darci Picoult, cinematographer Bradford Young (Academy Award-nominated for Arrival, Selma), and composer Philip Young, Dosunmu brilliantly conveys the plight of a strong-willed, capable woman who nonetheless finds herself slipping through society’s cracks, and toppling from a stable, secure life to the very edge of ruin. Director Andrew Dosunmu joins us to talk about take on the “invisible” people living at the margins of our major urban centers, a collective loss of empathy, and the impact his photo-journalism work had on the making of this starkly beautiful film.

“This woman may be lost to the world, but in Dosunmu’s quietly shattering vision, she is also unexpectedly, triumphantly found.” – Justin Chang, Los Angeles Times

“It’s a performance of such nuance and vulnerability, so quietly catastrophic in communicating this woman’s accumulation of loss.” – David Fear, Rolling Stone

“Where Is Kyra? finally allows [Pfeiffer] to explore the darker, unvarnished side of her talent and gives her the opportunity to do perhaps the best work of her lengthy, eclectic career.” – Christy Lemire, RogerEbert.com

“A shattering portrait of a luckless woman unable to pull out of the tailspin that is her life, “Where Is Kyra?” is a powerfully moody character study anchored by a remarkable performance from Michelle Pfeiffer.” – Tim Grierson, Screen International

“Rarely on film has the sheer debilitating exhaustion of poverty been so clearly conveyed.” – Bilge Ebiri, Village Voice