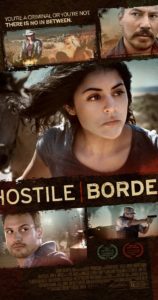 In the film Hostile Border Claudia, a twenty-something Chicana, is chasing the bling of a lux life, making bad choices – and eventually she gets caught. Despite the fact that she barely speaks a word of Spanish, her undocumented status gets her deported to Mexico. Although she can never legally return to the U.S. Claudia refuses to accept life with her estranged father and grandmother in her foreign “homeland,” and she spirals into a dangerous situation with a handsome smuggler. Veronica Sixtos’ gives a nuanced performance as an emotionally withholding anti-hero who’s trouble for anyone who dares to care about her. Hostile Border is pitched in a heightened style between a slow-burning thriller and a noir western, this smartly conceived allegorical tale confronts the dark side of the American dream. Veronica Sixtos as Claudia and leads an exceptional supporting cast of Julio Cedillo, Roberto Urbina, Jorge A. Jimenez, Jesse Garcia, and María del Carmen Farías, Hostile Border is a taut, high stakes family drama. The lead actress Veronica Sixtos join us to talk about her brilliant breakout performance, her music career and Hollywood’s growing embrace of latino-based stories.

For news and updates go to: hostileborder.com

“Co-directors Dwyer and Kaitlin McLaughlin prove more adept at the first act’s low-key character building than the action-movie showdowns they’re building toward, but Claudia’s use of a makeshift flamethrower late in the game is an unexpected joy.” – LA Weekly