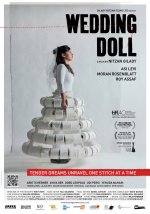 In the Wedding Doll Hagit, (Moran Rosenblatt) young talented woman with a mild mental deficiency who lives with her mother Sara, a divorced mother, in a small suburb town in the desert. She has a part time job in a toilet paper factory and longs to be independent. Her mother Sara (Assi Levy), who gave up her dreams, works as a chambermaid in a hotel and her life surrounds around taking care of her daughter. Hagit’s biggest dream is to get married. Secretly and without the knowledge of her mother, she’s in love with the son, Omri (Roy Assaf) of the factory owner, who gradually falls in love with her. In her mind, she believes that one day they’ll get married. The announcement of the closing of the factory shakes Hagit and Sara’s life and jeopardizes Hagit’s love story. Written and directed by Nitzan Gilady, an Israeli film director who has written, produced and directed the documentary films IN SATMAR CUSTODY (2003), JERUSALEM IS PROUD TO BE PRESENT (2008) and THE LAST ENEMY (2010). Wedding Doll is his first feature film. Gilady joins us for a conversation on making his internationally acclaimed award-winning film and the challenge of crafting Hagit’s story that is sensitive and respectful.

For news and updates go to: weddingdollthemovie.com

“WEDDING DOLL has echoes of ROMEO AND JULIET in the romance between Hagit and Omri… Moran Rosenblatt has the look of a young Patricia Arquette and her Hagit glows with an inner radiance”  – Allan Hunter, Screen Daily

“It’s a movie that deserves to be seen for many reasons, but especially the way it portrays a kind of character who’s quite often either dismissed, or made a cliche”  – John Anderson, Indiewire