WILD NIGHTS WITH EMILY tells the story of the mid-19th century poet, Emily 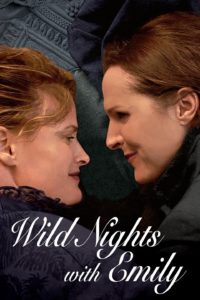 Dickinson writing prolifically, baking gingerbread, and enjoying a passionate, lifelong romantic relationship with another woman, her friend and sister-in-law Susan…yes this is the iconic American poet, popularly thought to have been a recluse. Beloved comic and Saturday Night Live alum Molly Shannon leads in this humorous yet bold reappraisal of Dickinson, informed by her private letters. While seeking publication of some of the 1,775 poems written during her lifetime, Emily (Shannon) finds herself facing a troupe of male literary gatekeepers too confused by her genius to take her work seriously. Instead her work attracts the attention of an ambitious woman editor, who also sees Emily as a

convenient cover for her own role in buttoned-up Amherst’s most bizarre love triangle. Meticulously researched with the support of the Guggenheim foundation, this dramatic comedy generously intertwines Dickinson’ actual letters and poems into the texture of the film, used with permission from Harvard University Press.  A timely critique of how women’s history is rewritten, WILD NIGHTS WITH EMILY remains vibrant, irreverent and tender–a perhaps closer depiction of Emily Dickinson’s real life than anything seen before. Director Madeleine Olnek (The Foxy Merkins, Codependent Lesbian Space Alien Seeks Same) stops by to talk about her “wildly” inventive and poignant reset of the often maligned American literary giant.

For news and updates go to: wildnightswithemily.com

“Wild Nights With Emily may be Olnek’s most political film to date, one that could forever change the narrative of the world’s most famous woman poet.” – Jude Dry, IndieWire

“Like the remarkable poet at its center, Wild Nights with Emily is playful, clever, and alive.” – Kristy Puchko, Pajiba

“This is an irreverent film, but its lightness is meaningful. With each silly flourish, Olnek offers joy and companionship to a figure whose history was more conveniently presented to generations of readers as solitary.” – Two Bugbee, New York Times

“Olnek has crafted a lovely, heart-warming piece which reminds us of the importance of revisiting and challenging historical narratives and leaves one in both fits of laughter and in need of a few moments of contemplation.” – Hannah Ryan, Much Ado About Cinema