A film within a film IN THE LAST DAYS OF THE CITY, Tamer El Said’s ambitious debut feature, tells the fictional story of a filmmaker from downtown Cairo 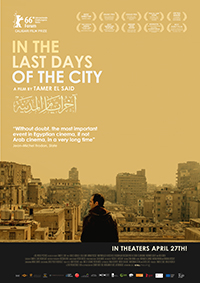 played by Khalid Abdalla (The Kite Runner, United 93, Green Zone, The Square) as he struggles to capture the soul of a city on edge while facing loss in his own life. IN THE LAST DAYS OF THE CITY is a haunting yet lyric chronicle of recent years in the Arab world, where revolutions seemed to spark hope for change and yield further instability in one stroke. The more things change, the more they stay the same. Shot in

Cairo, Beirut, Baghdad and Berlin during the two years before the outbreak of revolution in Egypt. Throughout, friends send footage and stories creating a powerful, multilayered meditation on togetherness, the tactile hold of cities, and the meaning of homeland. Shot in 2008 and completed in 2016, the film explores the weight of cinematic images as record and storytelling in an ongoing time of change. IN THE LAST DAYS OF THE CITY is a multi-layered stories are a visually rich exploration of friendship, loneliness and life in cities shaped by the shadows of war and adversity.  Director, producer and writer Tamer El-Said joins us for a conversation on his remarkably accomplished film debut.

For news and updates go to: inthelastdaysofthecity

“Without doubt the most important event in Egyptian cinema, if not Arab cinema, in a very long time.” — Jean-Michel Frodon, Slate.com

“A melancholic love-hate poem to Cairo and the role of filmmakers in any city in pain.” —Jay Weissberg, Variety

“Majestic… a lionhearted elegy for the Egyptian capital, artistic heritage in the Arab world, inspired politics, and hope itself” —Kaelen Wilson-Goldie, Artforum

“Beautifully lensed and complexly edited in a dense patchwork of people, feelings and events”  —Deborah Young, The Hollywood Reporter