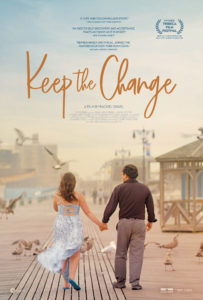 program at the Jewish Community Center, who  is sure of one thing: he doesn’t belong there. But when he’s assigned to visit the Brooklyn Bridge with the vivacious Sarah (Samantha Elisofon), sparks fly and his convictions are tested. Their budding relationship must weather Sarah’s romantic past, David’s judgmental mother (Jessica Walter), and their own pre-conceptions

of what love is supposed to look like. Under the guise of an off-kilter New York romantic comedy, Keep the Change does something quite radical in offering a refreshingly honest portrait of a community seldom depicted on the big screen. Rarely has a romcom felt so deep and poignant. Thoroughly charming and quite funny, the film’s warmth and candor brings growth and transformation to the characters, and ultimately, to us. Director and writer Rachel Israel stops by to talk about her friendship with lead actor Brandon Polansky, making the short film version of Keep the Change as well as the personal and artistically rewarding process of making this beguiling film.

For news and updates go to: kinolorber.com/film/keepthechange

“This gently humorous, fiercely honest indie film is a step forward in the quest for a move inclusive Hollywood, which seems to one of the themes of the cultural moment.” – Kerry Lengel, Arizona Republic

’“Keep the Change” is not a seamlessly crafted movie, but it’s awfully tenderhearted and thoroughly disarming. It deserves to be widely seen.’ – Glenn Kenny, New York Times

“What distinguishes it are Israel’s empathetic characterizations – she’s known Polansky for 15 years – and the winning performances, not only by the leads but also by the supporting players” – Mark Jenkins, Washington Post

“Hilarious and warm, finding its own voice as Israel creates a special space for her cast to shine, preserving idiosyncrasies and timing to best reinforce the unusual atmosphere of pure personality on display.” – Brian Orndorf, blu-ray.com

“An ode to self-discovery and acceptance that’s as funny as it is sweet.” – Nick Schager, Variety