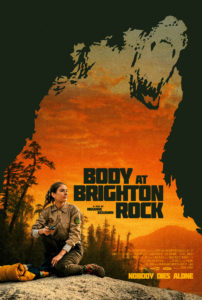 employee, Wendy, (Karina Fontes) at a mountainous state park, takes on a rough trail assignment at the end of the season, trying to prove to her friends that she’s capable enough to do the job. When she takes a wrong turn and ends up deep in the backcountry, she stumbles upon what might be a potential crime scene. Stuck with no communication after losing her radio and with orders to guard the site, Wendy must fight the urge to run and do the harder job of staying put — spending the night deep in the wilderness, facing down her worst fears and proving to everyone – including herself – that she’s made of

stronger stuff than they think she is. Director and writer Roxanne Benjamin made her directorial debut in the anthology SOUTHBOUND, which world premiered at the Toronto International Film Festival. She was last in the director’s chair for “Don’t Fall”, part of Magnolia Pictures’ all-women-helmed horror anthology XX, which premiered at Sundance in the Midnight section last year. Director Roxanne Benjamin stops by to talk about her slow-burn thriller and the challenges of a wilderness shoot.

For news and updates go to: bodyatbrightonrock.com

“Deftly employing the power of suggestion and an emotionally potent sound design, “Body at Brighton Rock” is a well-crafted thriller with some crafty tricks up its sleeve.” – Joe Leydon, Variety

“Body at Brighton Rock shifts from being a fun and colorful throwback to something a little darker and deeper.” – Meredith Borders, Slashfilm

“Relating to Wendy, and to her terror, is easy, and immediate, and lets the movie hook its claws into the viewer with jolting urgency.” – Andy Crump, Paste Magazine