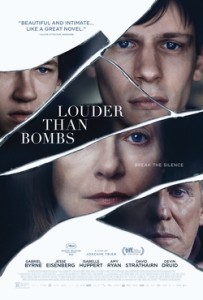 LOUDER THAN BOMBS is a stunningly intimate portrait of parents and children and the many things that tear them apart and bring them together. Three years after the death of famed photographer Isabelle Reed (Isabelle Huppert), her husband, Gene (Gabriel Byrne), and her sons Jonah (Jesse Eisenberg), and his younger brother, Conrad (Devin Druid), are still trying to cope with their loss. Shifting between past and present, and juxtaposing external reality with privileged glimpses into the interior lives of each of its four major characters. LOUDER THAN BOMBS captures the sadness of losing a loved one at the same time it celebrates the importance of family. The English-language debut of acclaimed Norwegian director Joachim Trier, (Reprise and Oslo, August 31) who was named one of the “20 Directors to Watch” by the New York Times in 2013, LOUDER THAN BOMBS was co-written by Trier and Eskil Vogt and photographed by Jakob Ihre. Joining Isabelle Huppert, Gabriel Byrne, Jesse Eisenberg, and Devin Druid in a stellar ensemble cast are Academy Award® nominees David Strathairn and Amy Ryan, and Emmy® nominee Rachel Brosnahan. Director Joachim Trier joins us to talk about the values and emotions that get passed down from generation to generation and the consequences.

For news and updates go to: louderthanbombs.film

“A family drama of extraordinary beauty… the film lives and breathes with a lovely intimacy” – Joe Morgenstern, Wall Street Journal

“’Louder Than Bombs’ Trailer is a Powerful Mediation on Grief” – IndieWire