JAY MYSELF documents the monumental move of renowned photographer and artist, 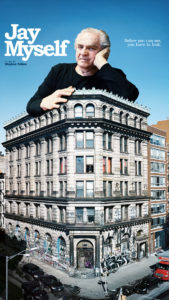 Jay Maisel, who, in February 2015 after forty-eight years, begrudgingly sold his home-the 36,000 square-foot, 100-year-old landmark building in Manhattan known simply as “The Bank.” Through the intimate lens of filmmaker and Jay’s protégé, noted artist and photographer Stephen Wilkes, the viewer is taken on a remarkable journey through Jay’s life as an artist, mentor, and man; a man grappling with time, life, change, and the end of an era in New York City. JAY MYSELF

Director Stephen Wilkes stops by to talk about his own relationship with Maisel, as a mentor and colleague, Maisel’s razor-sharp eye for composition and color and capturing the master’s bittersweet transition from his own creative Valhalla.

About Jay Maisel: After studying painting and graphic design at Cooper Union and Yale, Maisel began his career in photography in 1954. While his portfolio includes the likes of Marilyn Monroe and Miles Davis, he is perhaps best known for capturing

the light, color, and gesture found in everyday life. Some of his commercial accomplishments include five Sports Illustrated swimsuit covers, the first two covers of New York Magazine, the cover of Miles Davis’ Kind of Blue (the best-selling jazz album of all time), twelve years of advertising with United Technologies, and awards from such organizations as ICP, ASMP, ADC, PPA, and Cooper Union. Since he stopped taking on commercial work in the late ’90s, Jay has continued to focus on his personal work. He has developed a reputation as a giving and inspiring teacher as a result of extensive lecturing and photography workshops throughout the country. He also continues to sell prints, which can be found in private, corporate, and museum collections.

For news, screenings and updates go to: jaymyself.oscilloscope.net

Find out more about Jay Maisel at: jaymaisel.com

JAY MYSELF WILL OPEN IN LOS ANGELES ON AUGUST 16 AT LAEMMLE’S ROYAL THEATRE.  JAY MYSELF filmmaker Stephen Wilkes will participate in Q&A’s following the 7:40 pm show Friday, 8/16 and Saturday, 8/17 and after the 1:00 pm show on Sunday, 8/18 at the Royal. “Day To Night” book signing  to follow the Sunday Q&A (for valid ticket holders only).

“Energetic … a fun journey. (Maisel’s work) covers as much under the sun as a single photographer can capture in a lifetime.” – Glenn Kenny, The New York Times

“Lovely … every building, every street, every person is endowed with near mystical beauty.” – Owen Gleiberman, Variety

“One of the most esteemed, influential photographers of his generation. Jay Maisel suggests a comical amalgamation of William Friedkin and Marlon Brando.” – Derek Smith, Slant