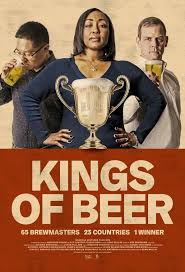 and experts, along with cameos by beer aficionados Aisha Tyler, Michael Voltaggio and Jay Chandrasekhar. In KINGS OF BEER, a diverse group of elite Brewmasters from 65 breweries and 23 countries, battle it out in an intense competition to brew the world’s most iconic American Lager — Budweiser. The Brewmaster who can brew the best, most consistent Budweiser over a 12-month period will bring home the Global Brewmaster Cup. Judged by an illustrious group of experts who are sequestered deep within the historic walls of the most renowned room in the brewing world — “Room 220” —  most of these “key tasters” have decades of tasting experience, which has trained their palates to pick up the most minute of flavor flaws. KINGS OF BEER is a fun and thoughtful deep dive into the world of brewing and what it takes to really be at the top of your game. It’s depicted through the eyes of Budweiser’s most highly-skilled Brewmasters, whose job is to maintain the consistency of the American Lager, which is widely regarded as the single hardest beer to brew. Director Sean Mullin joins us for a frothy conversation on the art and science of brewing the world’s oldest adult libation.

For news, screenings and updates go to: kingsofbeer.com

About the Filmmaker – Sean Mullin – As a writer/director, his short films – SADIQ, MAN IS A BRIDGE, and THE 14th MORNING – have won numerous awards and played at film festivals around the world.  His MFA Thesis Film at Columbia – SADIQ – was nominated for an MTV Movie Award for “Best Student Film.”  AMIRA & SAM is his feature-length debut as a

writer/director. As a screenwriter, Sean has been hired to write screenplays for Oscar Nominated Director Henry-Alex Rubin  (MURDERBALL) as well as pop sensation Britney Spears. Sean’s unique background as a former army officer turned stand-up comedian informs his creative sensibility, which oscillates between comedy and drama. Prior to launching his filmmaking career, Sean was a Captain in the New York Army National Guard – where he was a first responder after the attacks of September 11th. He spent his days working as the Officer in Charge of the soldiers down at Ground Zero, and his nights performing stand-up comedy. He was a regular at comedy clubs all around the city, including Stand-Up New York, Gotham Comedy Club, and the Upright Citizens Brigade Theater.