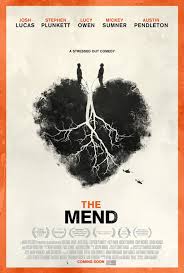 For anyone who’s ever loathed and loved a sibling in equal measure, The Mend is the wonderfully strange and acidic debut comedy from writer / director John Magary.  Shot through with the wicked humor and anarchy of Bruce Robinson’s Withnail & I and Mike Leigh’s Naked, The Mend follows a mismatched yin-yang pair of NYC brothers, loose cannon Mat (Josh Lucas in a career-best performance) and put-upon Alan (Stephen Plunkett) as they stagger dimly towards some understanding of love, women, masculinity and what it truly means to be a brother. Featuring a gorgeous, minimalist score by Michi Wiancko & Judd Greenstein and beautiful, fluid cinematography by Chris Teague (Obvious Child), the film unfolds as three stylistically distinc

t but interwoven acts, each with its own mesmerizing rhythm. With superb supporting performances by Mickey Sumner (Frances Ha) and Lucy Owen as the brothers’ sharp-tongued girlfriends. Director / Writer John Magary and Actress Mickey Sumner joins us for a conversation on the making of this ballsy, unhinged and brilliant film.

For news and updates go to: themendfilm.com/

“It’s a tough film to shake, a slice-of-life that slices, knifelike” – Alan Scherstuhl, The Village Voice

“The Mend is possibly the finest, most significant American film that 2015 has offered thus far.” – Nick Newman, The Film Stage

“My favorite narrative discovery of South by Southwest, unequivocally, was The Mend, which alternates between the restlessness and acutely observed masculine behavior of Cassavetes’ Husbands and the wit and energy of a Cukor comedy.” – Violet Lucca, Film Comment