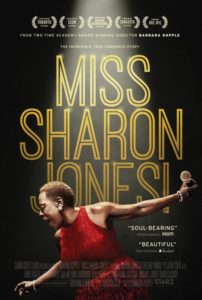 Two-time Academy Award-Winner® Barbara Kopple (Harlan County USA, American Dream) follows Grammy-nominated R&B dynamo Sharon Jones during the most courageous year of her life. Often compared to the legendary James Brown because of her powerful and energetic performances, Sharon Jones is no stranger to challenge. For years her music career struggled as she was kept in the wings by a music industry that branded her “too short, too  black, too fat.” After decades of working odd jobs, from a

corrections officer to a wedding singer, Sharon had a middle-aged breakthrough after joining forces with Brooklyn R&B outfit The Dap-Kings. In 2013, on the eve of the release of the much-anticipated album Give the People What They Want, Sharon was diagnosed with a life-threatening illness. Miss Sharon Jones! is a triumphant crowd-pleaser that captures an irrepressible human spirit as she battles back to where she belongs; center stage. Director / Producer Barbara Kopple joins us to talk about the daunting personal and career challenges Miss Sharon Jones has faced and her inexhaustible energy to create and carry on.

For news and updates go to:cabincreekfilms.com

“The film’s real success lies in having Jones as its primary subject, and that’s because she’s a wickedly funny, fierce, phenomenal force of nature, a positive, vivacious character whose generosity and charisma touches every single person.” – Tina Hassannia, rogerebert.com

“When she bounds onstage with a holler and a howl – and diction that nails every last word to the melody – it’s clear she deserves that exclamation point in the title.” – Jeannette Catsoulis, New York Times

“In the empowering tradition of Shut Up & Sing, Running From Crazy and Force of Nature, veteran documentarian Barbara Kopple serves up another portrait of female strength and resilience with Miss Sharon Jones!” – Leslie Felperin, Hollywood Reporter