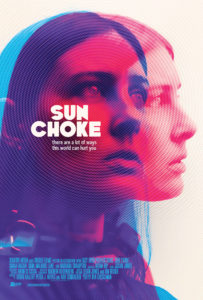 As Janie recovers from a violent psychotic break, she’s subjected each day to a bizarre holistic health and wellness regimen designed, and enforced, by her lifelong nanny and caretaker. But when she develops an obsession with a stranger, Janie’s buried demons begin to surface.

In the words of Director Ben Cresciman “Sun Choke is a study of the magical and terrifying things that can happen at the furthest margins of a personality. Watching a character work desperately inward from these margins can be among the tensest, and ultimately most cathartic experiences we can have in a movie theater. It creates a sense of disorientation and terror that elevates our fear beyond knee jerk reactions and into the realm of emotional identification. True terror is loneliness and confusion. It’s a psychological state of pure dread, not a simple mechanism to elicit scares. My goal with Sun Choke was to create a world where the beautiful and the terrifying, fantasy and reality, are inseparable from one another. It’s an exercise in holistic horror, in which the breakdown of the mind is inexorably tied to the destruction of the body. Employing abstraction and obstruction in equal measure to unspeakable violence and terror, what results is a hallucinatory meditation on loneliness wrapped inside a psychological horror film that strikes at the most fundamental fears in our collective unconscious.” Director Ben Cresciman stops by to talk about his thrilling, disorienting and challenging new film.

For news and updates go to: sun-choke

“Ben Cresciman’s intense psychological horror film, Sun Choke, is the story of a woman staring into the abyss of nothingness and liking what she sees: absolute nothing, a retreat from the chaos of the light.” – Martyn Conterio, CineVue

“Sun Choke is, in keeping with a protagonist who comes in more than one ‘version’, a disorienting, dissociative affair, reminiscent in parts of Yorgos Lanthimos’ Dogtooth (2009) – and all beautiful, tense, hallucinatory and deeply disturbing.” – Anton Bitel, Sight and Sound