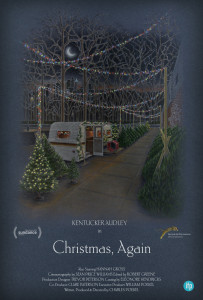 For a fifth consecutive December, a heartbroken Noel returns to New York City to work the night shift at a sidewalk Christmas tree lot. Devoid of any holiday spirit, he struggles to stay awake during the long, chilly nights in his trailer, while the daytime traffic keeps him from getting any real rest. As he slowly spirals into despair, he comes to the aid of a mysterious young woman in the park. Her warming presence, matched with some colorful customers, help rescue him from self-destruction. Director, writer and producer Charles Poekel stops by for a conversation on his lyrical, redemptive film about a man finding a unique take on a holiday tale.

For news and updates go to: factorytwentyfive.com/christmas-again/

Opens in Los Angeles at the Laemmle Noho 7 on Friday, December 11th

“[An] utterly likable riff on urban loneliness that never forces its themes… By merely breaking away from those clichés and carving out a charming fresh path, Poekel makes a quietly defiant statement.”  - Eric Kohn, INDIEWIRE –

“Feels like a throwback to the kind of New York character study someone like Jerry Schatzberg (“Panic in Needle Park”) or Hal Ashby (“The Landlord”) might have dreamt up back in the ’70s.”  - Peter Debruge, VARIETY -

“A delicate, simple film that really works… Audley does his best work to date, conveying a deepening depression that doesn’t stop this man from trying to be helpful to those around him. And Gross is a real find, completely believable in every moment as the warmth that could rescue an increasingly chilly heart.”  - Brian Tallerico, ROGEREBERT.COM